I can’t tell you how many clients I work with who literally tell me their ex has blocked them on everything.

If you find yourself in this situation then rest assured that you have come to the right place.

Today I am going to pull back the curtains and show you how to get your ex to unblock you. I am going to do this by showing you success stories of women who’ve been unblocked by their exes.

Also, if you read this article in it’s entirety I am going to tell you the story of what one of my clients had to do to get unblocked by her ex.

What she did was so brilliant that I’ve started recommending it to anyone within earshot.

Help! My Ex Blocked Me On Everything

There are really three things that I’d like to cover in this article.

These three topics will give us a lot to unpack.

Tip #1: The Partial Block Vs. The Full Out Block

Believe it or not but there are two types of categories that being blocked can be divided into.

It always shocks me how many people fail to understand which of these categories they fall into.

Here’s a quick rundown of what each of these mean.

The Partial Block = A situation where your ex has blocked you ALMOST everywhere.

To date, these are the most common ways people communicate with their exes.

And I’m probably forgetting a big “social media platform” but I think you get the picture.

“The partial block” assumes that your ex has blocked you on almost every single platform but they’ve left one small way of getting in contact.

I’d estimate that close to 80% of the clients I work with fall into the category.

The second category is a little more difficult to deal with.

The Full Out Block: Takes a situation where your ex has blocked you EVERYWHERE

But perhaps nothing is as frightening as what I’d like to talk to you about next.

If you didn’t already know, all of the clients I work with get access to a special private support group.

(They get extra goodies essentially. )

To date, there are a little over 2,000 members in the group.

Each has gone through a breakup and are there to support you throughout your journey.

Anyways, a few weeks ago I stumbled across this really interesting comment from one of my members, 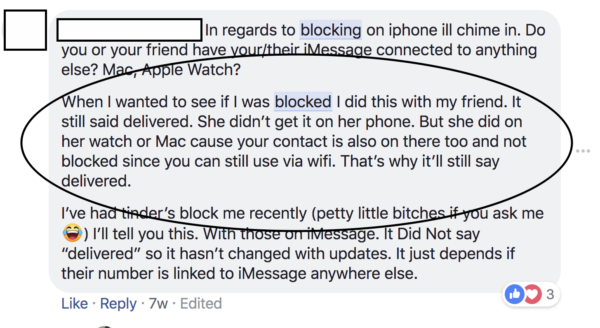 Essentially what she was saying is that she was curious how the iPhone handled “blocked messages.”

So, she had a friend block her and then she proceeded to send a message to her friend to see how the message behaved.

You might be familiar with this language here when you send successful messages.

So, how are you supposed to determine if your ex has blocked you via text message.

Honestly, my best piece of advice here is to combine two concepts.

If a lot of time goes by with your ex not being responsive at all then it is probably a clear indicator that you are blocked.

What is a good time frame to go on?

Honestly, it depends on a lot of factors.

Tip #2: What Successes Teach Us About Getting Unblocked

Above I mentioned that I have this special support group for my clients.

Perhaps one of the biggest assets of having a group like that is I get to communicate with people using my program all at once.

I also get to see a lot of success stories.

So, in preparation for this article I decided to look through the group in the last year for success stories when it came to getting unblocked.

My only goal was to determine if I could find any kind of consistency or through line I could use to teach you.

In all, I was able to find seven unblocking success stories. 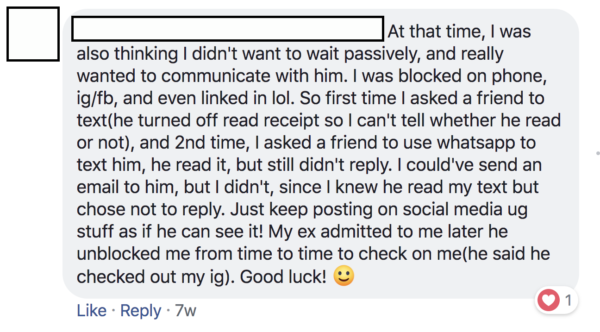 Lesson Learned = Her ex admitted to unblocking her from time to time to check on her. This might indicate that exes seem to put up a “cool” front so that they look fine on the outside when they aren’t on the inside.

Lesson Learned= This particular person has something really interesting to say. Her ex blocked her on Facebook but that didn’t stop her from going out and having a good time. Upon our advice she posted the pictures on Facebook and a week later she gets unblocked.

This would seem to indicate that even if you are blocked your ex still pays attention to your photos.

Lesson Learned: This person did something interesting. She determined that she was blocked pretty much everywhere except email. So, if you were paying attention above you’d notice that she would be categorized as a “partial block”

After a few months of communicating through email unblocking became natural.

Lesson Learned: This one was inconclusive because she didn’t provide enough data.

Lesson Learned: Again, this one isn’t conclusive from an “unblocking” standpoint but she did have something interesting to say from her historical experience when it came to dating.

In her experience exes tend to block you because they are “lashing out.”

She also seems to imply that getting an ex to unblock you is simply a matter of riding it out.

Lesson Learned: This woman seems to come down on the side of patience. She states that it is usually only a matter of time before you are unblocked.

If you are anything like me then you are probably a fiend for connivence and want all of what I just jotted down in one simple place for you to glance at.

Consider this to be your “unblocking” cheat sheet.

Tip #3: The Brilliant Tactic One Of My Clients Used To Get Unblocked

I can’t take credit for this particular tactic even though I’d like to.

For this one I’ll have to nod to my client and thank her for letting me recommend it to you.

My client was in a situation where she was in a “partial block.”

She was able to communicate with her ex via text messages but she was blocked completely on Facebook.

Unsure of how to start a conversation with him on how to get him to “unblock her” she decided to do something brilliant.

Her ex was a big fan of the Miami Dolphins.

For those of you overseas that is a football team.

She happened to be at one of the games and took a bunch of pictures with friends.

Naturally she posted the photos on Facebook and was sure that he’d love to see them. She was literally about to send the pictures manually over text message when she got an idea.

She sent him this text, This subtly confronted the “blocking” issue and since he was such a super fan he was forced to unblock her to see the pictures.

You see, the brilliant part of this strategy doesn’t lie in the execution but the carrot.

The only reason this worked for her was because she tempted her ex with something she knew he was passionate about.

This wouldn’t have worked if she tried to entice him with ballerina pictures.

No Response Can Still Be A Response

Does No Contact Work If Your Ex Has You Blocked?

117 thoughts on “My Ex Blocked Me On Everything”