Today we’re going to be talking about something that a lot of people ask me about and that is, “What is my ex feeling during a no contact rule.”

Now, if you don’t know what a no contact rule is, I have plenty of resources on my website, YouTube channel and podcast describing what that actually is.

But to give you a quick crash course,

A no contact rule is simply a period of time, where you’re ignoring your ex on purpose.

Now, this creates a lot of questions, especially around if it’s effective or not, and what happens when it is effective.

How does your ex act?

What are they feeling?

Well, that’s what this presentation is about today.

A Quick Word Before We Get Started

Now, before we get started there are a couple of things that I think you should do if you’re a newbie and you’re trying to get your ex back.

The first thing is to actually stop by my website Ex Boyfriend Recovery and take my ex recovery chances quiz.

It’s a simple two minute quiz that I put together that will ask you a lot of questions about your situation, when your breakup was and the circumstances around your breakup. Using that information I can actually put it through an advanced algorithm to give you an idea of what kind of chance you have of getting your ex back.

So, if you want to take that quiz all you simply have to do is go to my website or click the button below.

All right, let’s get started and talk about what your ex is feeling during a no contact rule.

The Five Stages Of Feelings During The No Contact Rule

When I was brainstorming how to present this information to you, I came up with kind of, an interesting idea and that was, breaking up the feelings that your ex is feeling into five distinct stages.

I feel like I should include in this conversation that a typical no contact rule will last anywhere from 21 days to 45 days depending on the severity of your particular situation. This means that every ex will react a little bit differently to the no contact rule. For example, sometimes stage one can last for two weeks while stage two can only last a few days.

But generally speaking the dates that I’ve outlined here are pretty accurate.

So, let’s take a moment and dissect what each one of these things means so that you can get in your exes head and understand exactly how they’re feeling.

Stage #1: Your Ex Is Calm And Assured Of Their Decision

So, stage number one is that they are calm and assured of their decision.

This one is pretty simple.

They feel very calm and as if they made the correct decision to leave the relationship. Like I said, this will typically last from anywhere between three days to a week. So, when you’re doing a no contact rule for the first three days to seven days they’re feeling kind of, good about themselves.

It’s important to keep in mind that, really, they haven’t confronted their feelings just yet.

They’re still in that honeymoon period of,

“Wow, I don’t have a relationship to prevent me from doing this.”

It can be an exciting time for them.

Usually during this stage you’re not going to hear from them.

But if you do hear from them, and that does happen sometimes, you’ll usually get basic messages like, 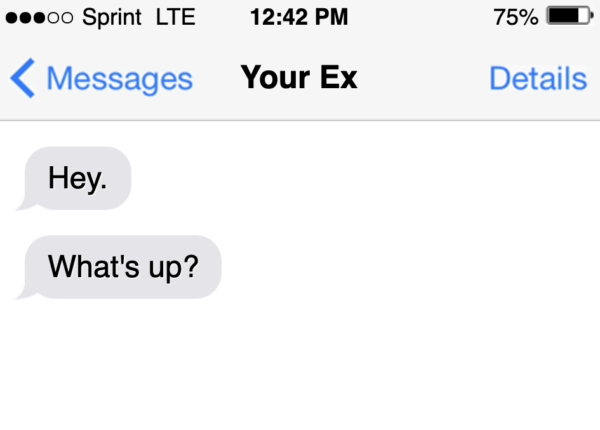 Now, where things really heat up is with stage two.

Stage #2: Worry After They Don’t Hear From You

Stage two is worry after they don’t hear from you. Relationships are often defined by their patterns. This is especially true when it comes to communication.

Often when we are locked into a relationship with someone we get into certain communication patterns with that person.

For most pretty strong relationships that usually means you will text every day.

Well, when that pattern gets interrupted with a no contact rule you can start to notice worry within your ex.

Especially after your ex is thinking,

“Oh yes, he or she will break. For sure they’re going to contact me first.”

So, in this stage they begin to worry after a week potentially has gone by and they haven’t heard from you.

That’s when you’ll start to notice an uptick in checking social media accounts.

You’ll start to notice, they are stalking your Facebook profile and you may start to see them begin reaching out to you in this stage. And this is usually rare, but does happen, especially if you are on your social media game.

They can worry that you’ve met someone else.

Stage #3: Anger After They Realize They Are Being Ignored

Now, stage three really ratchets up the tension another level.

Stage three is all about anger.

They are angry when they realize that you are ignoring them.

By this point it’s been usually, about two weeks into the no contact rule.

They maybe have reached out to you a few times, you have ignored their attempts to reach out to you, or they’re simply angry that you’re not reaching out to them first.

This is a very common breakup behavior. So, there are a couple of things that you may see them do in this particular stage. Obviously they’re going to grow angry and that anger can create two different outcomes. Outcome number one is, they may just completely ignore you.

Some people when they get angry are passive-aggressive.

The other approach, or the other thing that you may see start to happen is, they will start to text you.

And the texts will not be nice. Things of this nature are simply a reaction to stage three. They’re angry. They’re angry that they’re being ignored. Things aren’t going the way that they thought they would, and they’re lashing out at the only person that it makes sense to lash out to and that would be you, the source of their frustration and pain.

Stage #4: A Confrontation About What They Lost

Now, stage four is where things start to take a turn for the better.

That is, a confrontation about what they lost.

In stage one I talked about the fact that even though they’re calm and assured of their decision, they really haven’t confronted their feelings just yet.

Well, stage four is that confrontation.

So, part of them potentially may have hoped that you would beg for them back after the breakup.

I know certainly, I have been through multiple breakups where I have thought this exact thing.

“I’m going to make her beg for me back.”

And when that doesn’t happen you begin to look at the person in a whole new light.

You begin to realize,

“You know, maybe I had them pegged wrong.”

And reactions also can vary here just like in stage three.

Some exes will get in touch with you to try to make amends for their outbursts in the angry stage.

They’ll say something like, “Hey, you know what? I’m really sorry I lashed out to you. I was just having a tough day.”

And others can remain stoic and silent.

They can sort of, take the confrontation and say to themselves, “Well, you know what? I’m in a lot of pain here. I’m realizing that I may have lost this person forever, I’m scared to reach out and put myself out there. I’m just going to wait and see how things play out.”

These are the most common type of reactions you’re going to see from people in this stage.

Now, stage five is kind of, the fun part.

They’ve been through a rollercoaster of emotions up until this point. So, your ex really starts to shift gears here in hopes that you’re going to contact them. They may fidget and constantly check their phone to see if you have reached out.

This is an all throughout the day kind of, an activity where maybe they’re at work and they’re hoping that they hear from you.

And maybe it’s a false hope, and maybe they realize that maybe there’s a small chance that you will reach out.

So, every once and a while when they get a text they immediately pull it out hoping that it is from you, they check and see it’s not from you and they get angry and upset, because they realize they want you to be the one that’s texting them.

And also, here is where you’re going to see a huge uptick in social media stalking, whether that’s Instagram, Snapchat, or Facebook.

Those are the three most common ways that people will kind of, check up on you and see what’s going on. “Has he or she met someone else? Am I kind of, fool hearted here for hoping that maybe, they’re going to contact me? Are they okay? How are they living life without me?”

These are all questions that they’re wondering in their head, and the way to get those answers without directly asking you, is to go through social media. Also, you’re going to hear or see another uptick in hoping that they’re going to respond to their text messages.

So, you may start to see a flood of text messages coming in towards the end of the no contact rule as well. And those are the five stages that are most common with how your ex is going to feel after a breakup.

242 thoughts on “What Your Ex Is Feeling During No Contact”