Your boyfriend says he wants a break and I am guessing you don’t.

Maybe you’ve told your friends and family that you sense a breakup is coming and then when they press you for details all you can tell them is,

I just have this feeling

But they aren’t locked in your head. They haven’t obsessed about every detail and interaction you’ve had with him.

And then it comes…

And that leads us to the topic of today’s article.

What the heck are you supposed to do if you find yourself in this situation.

Well, what if I told you that I have come up with a very unique three step process to guide you through this very difficult time. 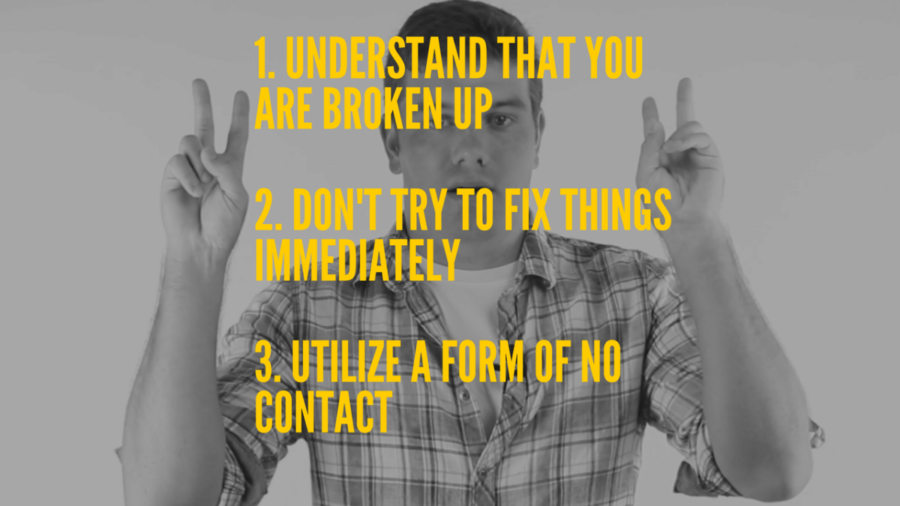 You’ll find that where I stand on this situation differs from most outlets.

You see, most people like to tell you to handle things the “politically correct” way. They’ll tell you that you shouldn’t play games and that if you set something you love free it’ll come back.

All I care about are results.

And in my experience letting things “just sit” doesn’t work too well.

But more on that in a minute.

There are three things that I want you to do if you find yourself in a situation where your boyfriend says he wants a break.

I’d like to go through each of these things one by one so that you know exactly where I stand on them and you can have an idea of what can ultimately get you results.

1. Understand That The Two Of You Are Broken Up

Every time I gear up to write one of these articles I do research.

This research comes in many different phases.

Interestingly when I started looking at my peers for this article I learned that our strategies are vastly different.

The general consensus with them was,

Honestly, I think they’ve just watched a few too many episodes of friends,

Now, you may not agree with what I am about to say but honestly is there any difference between being on a break and being broken up?

People will have you believe that if you are on a break that you can pause the relationship.

That you need time to sort out your feelings and that when the break is over you can let your partner in on those feelings. But I find reality is much harsher than fantasy.

In almost every case I have found that a break is simply the gateway to a breakup.

And if you think about it, it makes a lot of sense.

You go on a break when something doesn’t feel right.

You go on a break when you feel that something with the relationship is broken.

You don’t go on a break when things are great.

I want you to do something for me.

Every time you think of this “break” I want you to replace that terminology with “break up.”

The sooner you undergo this paradigm shift the better for what’s to come.

Actually, rather than having me ramble on here I’d like to talk about what’s to come.

Human beings tend to be reactionary when it comes to breakups.

It’s a bit of cause and effect at play.

Your ex breaks up with you (cause)

You try to fix things as soon as possible (effect)

But what if I told you that the worst thing that you could do would be to try to fix things right now?

You found this article, probably through Google, which means that you typed in some variation of,

“What am I supposed to do if my boyfriend tells me he wants to go on a break?”

This implies that it was him that initiated the “break up.”

And you want to know why I think these are huge mistakes.

Because you are trying to fix things from a position of weakness.

It’s not that I am not a fan of “fixing things.” On the contrary, the whole purpose of this article is to put you in a position to where you can begin fixing things. However, I play to win.

So, I am going to recommend the course of action that’s going to get you the best results.

And what gets you those results are two simple concepts,

We are going to cover the timing aspect of this strategy when we start talking about the no contact rule. So, for now I’d like to talk to you about perception.

How Perception Plays A Role

I started this website back in 2012 to create an environment that cut through the BS out there. I wanted to get right to the heart of the matter and teach people what really worked.

And for the most part I feel like I succeeded in doing that.

But learning about what works to re-attract someone after a breakup is a little funny. As time went on and I worked with more individuals on a one on one capacity I began to refine my strategies. In other words, the current version of Chris Seiter has way better advice than the version who started this website.

Well, it’s all about perception.

Last night my daughter got sick and the first thing my wife and I did was quarantine me from the situation. Children are like little biological weapons that infect everything they touch.

(Parents, you know what I am talking about.)

Now, generally I don’t mind getting sick but ever since I started this business it’s one of my greatest fears.

Because if I go down pretty much everything else I’ve built up does.

Needless to say, I ended up sleeping in a different room from my wife and my daughter (both who are sick now) in an effort to avoid catching this nasty cold. So, I found myself with a bit of free time. I did what any self respecting person does with free time.

I fired up Netflix and started looking for a show to watch.

Ultimately I settled on a show called Peaky Blinders, 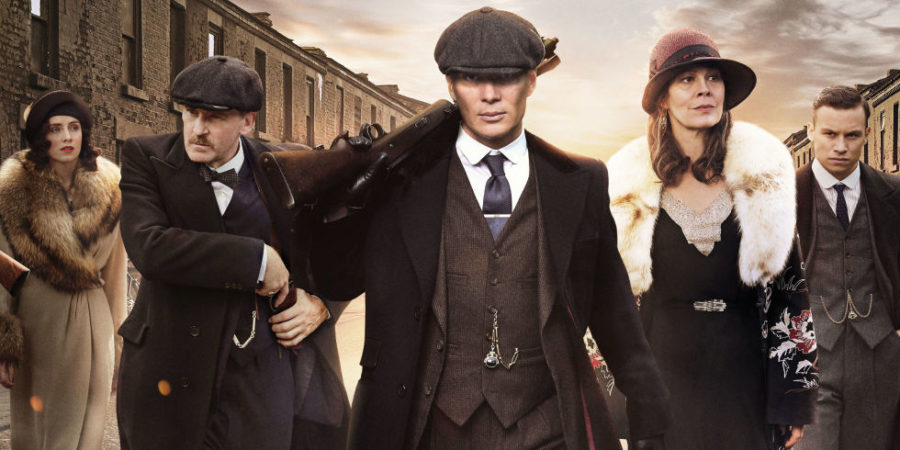 I bought into the show after about 2 minutes.

I don’t really know why but I found myself captivated. In fact, I was so captivated I stayed up till 4 AM just devouring the first few episodes.

Which in hindsight is kind of a dumb thing to do if you are trying to avoid getting sick.

Anyways, in one of the episodes a character said something that really struck me,

You don’t parley when you’re on the back foot

This quote is essentially all about perception.

For those of you who don’t know a “parley” is,

Parley: holding a conference with the opposing side to discuss terms.

So, back to the quote.

Again, it’s all about perception.

If your ex views you as,

It gives them this strange upper hand and removes any mystery from the equation. And in case you didn’t know you need mystery working for you if you are going to get your ex back.

So, rather than trying to fix things immediately I say you wait until you can approach the situation from a position of strength.

Wait, how the hell can I do that?

Above I mentioned two ideas that tend to get more results than anything.

Do you remember what those were?

Well, above I talked all about perception.

The no contact rule is where timing comes into play.

Let’s say that the shoe was on the other foot and you told your boyfriend that you’d like to go on a break from him. It’s clear that he doesn’t want to cooperate but he plays along holding on to a shred of hope. Then, unexpectedly, your father passes away.

You and your father were unbelievably close and you are crushed by the news.

Would that be the opportune time to win your heart back if your (now) ex boyfriend tried?

Because the timing isn’t right.

You aren’t in a state where you are even open to the idea.

Do you see where I am going with this?

Pretty much a massive part of this battle is getting your boyfriend to the correct state where he can view you romantically.

And right after he asks for that break isn’t that time.

So, what can we do to help the “right” time to come about?

I’ve talked a lot about the no contact rule here, here and here.

I’ve also done quite a number of awesome videos over it,

But if you want a quick crash course,

The No Contact Rule: A period of time (21, 30, 45 days) where you completely ignore your ex in an attempt to make them miss you. It also gives you an opportunity to improve aspects of your life that you need to work on so that you can truly hit that UG status (UG = Ungettable Girl)

It’s worth mentioning that sometimes a straight no contact period isn’t ideal for your situation. If you find yourself wondering if you should be using a limited no contact rule check out that article.

I know that didn’t look like a lot but that took a bit of work tracking down all of those links and videos 🙂 .

Anyways, you are probably sitting there wondering,

How does this even benefit me? Why should I do a no contact rule?

Well, I’ve been thinking that a lot lately.

And while I can sit here and throw out some insane statistics like how 100% of our successes within our private facebook group have utilized the no contact rule that wouldn’t really explain why it works.

I think more than anything it’s due to the fact that it speeds up the timing of your boyfriend “being ready.” But just ignoring him for a certain amount of time isn’t going to be enough to do that alone and that’s really where the secret sauce comes into play.

I get upset when I am working with a client one on one and we both agree on a course of action that they need to take during a no contact rule and ultimately they don’t do it.

The no contact rule doesn’t yield the results that they were hoping for and they call me back and tell me that it didn’t work.

It didn’t work because they didn’t do the most important aspect of the no contact rule and that is to use that time to change your exes perception of you.

Did the lightbulb go off yet?

There is a synergy between everything I am teaching you here.

The no contact rule hits on the timing aspect by simply ignoring your ex but it’s up to you to change his perception indirectly by using that time away wisely.

Now, how do you do that?

Well, that’s where I am going to recommend that you check out some of the other articles on this website!