Today you’re going to learn EXACTLY what the psychology of a man is during the no contact rule.

In fact, many of the insights I’m going to unveil to you today have been lauded by my own audience. 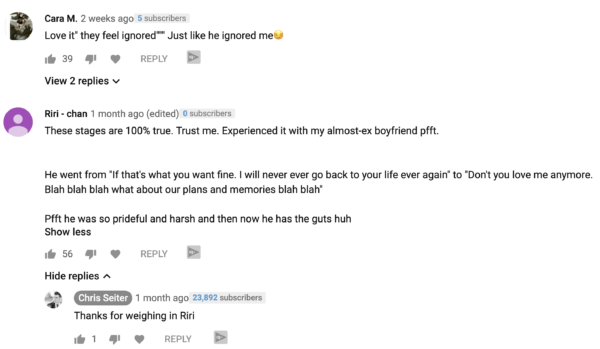 Everything I’m about to show you has been proven by real who have gone through breakups and used the no contact rule on a man.

Most people hear about the no contact rule and all it can do for them but they never really seek to understand the internal workings of why it works. I’ve written a lot about this concept in the past but

I’ve always alluded to it indirectly.

Let’s start by defining exactly what the no contact rule is for our newbies.

The No Contact Rule: A period of time where you purposefully ignore your ex with the intent of making them miss you and improving your life.

What many of my clients seem to miss is the second part of that definition.

They get so caught up in making their ex miss them that they forget to make meaningful changes in their own lives.

But that’s another battle for another day.

What you are here to learn is why it works on men.

Psychologically the no contact rule operates on the idea of reactance.

Reactance And The No Contact Rule: When you take away an exes freedom to communicate with you he will react in a way to get that freedom back.

It plays on the same concept of reverse psychology.

Weird how that works, huh?

Perhaps the most interesting tidbit of information I can provide for you is the simple fact that even if your ex understand what you are doing to them it can still be extremely effective. I can’t tell you how often I’ve worked with clients who have expressed this fear only to see it not even matter and still continue to work on their exes.

But you’re not here to listen to me get all technical. What you really want is to understand the psychology of what happens in a mans head as the no contact rule is being applied to him.

I’ve briefly talked about that in this video,

But the limiting aspect of the video didn’t allow me to go into deep detail on some of the exact thought processes that your ex boyfriend may be having. The video mentions five stages that a man will go through if a no contact rule is working on him.

I’d like to let you in on them right now.

Stage One: He Is Confident In His Decision To Break Up With You

This may seem like an odd place to start but in my experience close to 80% of the women reading this website are not the ones who broke up with their ex boyfriends. Instead, they are the ones wallowing in despair because their ex has broken up with them.

So, they go from website to website reading and trying to figure out the best way to win their exes back.

Some go to YouTube and stumble across my channel and inevitably learn about the no contact rule.

They start it with high hopes that their ex will reach out to them admitting a mistake but the opposite typically happens.

It’s crickets for the first few days that they implement it.

Well, to put it bluntly, their ex doesn’t care enough.

Instead, he will walk around extremely confident in his decision. There’s this meme that gained popularity about seven or eight years ago depicting the differences in how men and women handle breakups. As crazy and uncultured as this is going to sound I have found that this meme is pretty darn accurate to what actually happens if you successfully complete your no contact rule.

When you start your no contact rule on your ex boyfriend he is not going to care.

That may be a pretty hard pill to swallow right now but it’s important that if you want to get the successful results that others have gotten with no contact you are going to have to earn them.

And the only way to do that is to actually complete your no contact period without any hiccups.

Right now your ex is confident in his decision to break up with you but don’t worry, the tide will soon begin to turn.

Stage Two: Why Isn’t She Acting Like A Normal Girl?

This may strike you as an odd “stage” for a man to go through during the no contact rule but if you really think about it, it does make total sense.

The stereotype for women after a breakup has always been extremely clear.

After the breakup your ex boyfriend is going to have this internal thought process that he’s going to go through. “She’s going to be so depressed without me” he’s going to think to himself and most women play into that narrative by posting depressing things and updates on their social media profiles.

Some even go as far as begging for their ex boyfriends back.

But where things get really wild for the women who use the no contact rule is that they fight the normal narrative of depression with a hopeful narrative of positivity.

So, instead of the narrative being.

“She’s going to be depressed and beg for me back.”

Why isn’t she depressed and why doesn’t she want me back?

Stage Three: I’m Upset She Is Ignoring Me

Paradigm shifts can be extremely powerful.

In fact, I’d argue that one of the primary reasons the no contact rule is so successful is the fact that it forces this dramatic paradigm shift upon your ex. You are essentially rewriting the narrative of what he expects is supposed to happen.

Of course, a paradigm shift in and of itself is a dramatic change in circumstances and it’s my experience that men don’t deal well with change.

In reality, no one deals well with change but change is an ever present entity throughout the universe.

Personally speaking when sudden change occurs for me I grow visibly upset. Expect your ex to be upset with you during no contact.

This is something I feel every woman should be prepared for and yet when it happens they start panicking.

My advice to them is always the same.

Don’t panic, just realize the no contact rule is working

In fact, I talk about this very concept in one of my more recent podcast episodes.

Don’t be worried if you get a bunch of angry texts from your ex boyfriend.

They are growing angry because change has occurred and they don’t quite know how to handle it properly.

Stage Four: I’m Going To Find Someone Better Than Her

This is simply an extension of stage three.

Cause and effect so to speak.

You instituted this extreme change by interrupting the status quo.

As a result he thinks he’s better off without you and can find someone better.

Many women have this recurring nightmare where their ex moves on to someone else and in most cases it would be at this moment that, that outcome would occur.

Here’s the interesting tidbit that you may not know.

There is a difference between an ex who has another girl lined up before he breaks up with you and one who gets another girl to show you up.

One is more likely to turn into a longer relationship while the other is almost surely a rebound.

That’s why I don’t worry too much if your ex boyfriend finds another girlfriend during the no contact period. Most of the time it is done from a place of anger and disappointment.

I don’t know about you but those don’t seem like the great foundations of a lasting relationship.

Stage Five: I Need To Find A Distraction To Avoid This Pain

Are you starting to see the trend developing here?

Each new stage is a knee jerk reaction to the stage before it.

Stage four was a direct result of stage three.

This stage is an explanation of the mindset for stage four.

Why do you think your ex boyfriend would want to “find someone better than you?”

It’s probably because he needs to find a way to distract himself from the pain he’s feeling. I think I’ve been pretty direct in explaining exactly what happens to the mind and body during a breakup.

In short, it aint pretty.

Getting over a breakup is a little like trying to shake off a drug habit.

It doesn’t happen overnight and in many cases your ex boyfriend is going to look for anything or anyone to distract from the pain he’s feeling.

Some people face their problems head on while others run away from them.

This is the ultimate “run away” from the problem stage.

Stage Six: What Have I Lost?

Here we have the proverbial confrontation.

Remember the fight or flight instinct I was talking about in the last section?

Well, while stage five was the “flight” response here is the “fight response.”

After enough time has gone by for an ex to process the breakup and feel like he’s lost you forever it will force him to confront a reality in which he can’t have you.

“What have I lost?” he will think to himself.

He has arrived at the proverbial crossroads.

On the one hand, he may determine that he is ok with losing you.

But if you’ve been active during your no contact rule you increase the chance of him not being able to face that reality without you.

But as you’ll learn very shortly.

Even if he doesn’t like a reality in which he can’t have you ever again it may not be enough to fully push him over the edge and get him to contact you.

Men are stubborn by nature.

Sometimes no matter how perfectly you play a situation they still will cling to their outdated philosophies.

One of those philosophies is that you should be the one to reach out first after a break.

Ironic, in most cases they are the ones who break up with you.

Shouldn’t they be the ones to reach out to you first?

Nevertheless, the psychology behind this thought is pretty simple.

Even after the rollercoaster of emotions that come with stages one through six.

Men are stubborn at heart and often they’ll cling to hope that you’ll reach out to them at some point during the no contact rule.

It takes your ex boyfriend on this emotional journey and it’s rooted almost completely in reverse psychology.