Want to make your ex jealous?

Then you’re in the right place.

Because today I’m going to show you the most effective ways to make your ex jealous so that they are drawn to you after a breakup.

The methods I am about to unveil to you can be applied across all kinds of mediums like,

Are you ready to dive in?

What To Do To Make Your Ex Jealous I’ve written a lot about jealousy on this website and even recommend it in my book.

However, it is my intention to make this article the ultimate “hub” of information when it comes to jealousy tactics.

I have been doing this for over 6 years and throughout that time I have constantly fine tuned and refined my thoughts on jealousy.

As it stands the best way to make your ex jealous can be divided up into four parts.

Lets start by talking about jealousy a little bit.

1. Is Jealousy The Right Strategy To Win Your Ex Back? One thing my tenure at Ex Boyfriend Recovery has taught me has been that no two situations are ever alike.

What works for someone may not necessarily work for the next person.

Sure, I’ve talked about my endless desire to find “the truth” of winning an ex back by locating the universal strategies but those are few and far between.

And that’s where jealousy comes into play.

Jealousy is one of those strategies that I feel is universal but there are certain situations where it’s a nightmare to use.

But before I dive into what those situations are lets take a look at why jealousy is a viable strategy to get your ex back.

Why Making Your Ex Jealous Works

Like I’ said above, I’ve been doing this for a very long time.

This means that I have a lot of firsthand experience at seeing what works and doesn’t work. In fact, I talk about this experience quite a bit in my book and have even written a few articles on this.

Essentially, you need to position yourself in a way that convinces your ex that they may lose you forever.

It’s at this point that they start to consider what they are about to lose. If they feel that they can’t live without you they start to take action and often that action comes in the form of a commitment.

Now, there are a lot of intricacies of the strategy that I am skipping over but if you can successfully position yourself in a way that makes your ex think they’ll lose you forever the better off you’ll be.

(For the record, if you want a crash course on “the strategy” I recommend watching this,)

Jealousy is a tactic that taps into that “fear of loss.”

By having your ex see you with someone else they are forced to confront a reality where you aren’t obsessing over them.

That’s exactly where you want them.

Thus far we have been operating under the assumption that everything is going to work out perfectly when you use jealousy but what if you encounter a situation where your ex has severe trust issues?

Well, that’s why I hesitate to fully say that jealousy is a universal strategy as there are situations where I would recommend that clients avoid it like the plague.

Situations Where You Shouldn’t Be Using Jealousy

Last month I was hired by a client who wanted me to help her get her ex back.

Her situation was a bit complicated but essentially it boiled down to this, she cheated on her ex boyfriend and this created a lot of trust issues that the relationship simply couldn’t sustain.

Do you think that my client should be using jealousy as a primary strategy to get her ex back?

In situations where your ex has severe trust issues with you the worst thing you can do is reinforce those negative assumptions by trying to make your ex jealous.

Getting an ex back is a little like trying to lure a wild animal away from it’s den. If you do and say the right things you have a pretty decent shot but one misstep and it’s game over.

So, here is the general rule that you should live by. If you find yourself in any of these situations DO NOT use jealousy,

Ok, now that we have that concept out of the way lets move on and talk about direct and indirect jealousy.

2. Understand The Direct Vs. Indirect Scale When It Comes To Jealousy In my opinion, there are two major categories when it comes to jealousy.

Each category has the same “end goal” it’s just that they go down completely different paths in how they achieve that end goal.

Now, as you read through this section you may find that you are inevitably drawn to one aspect more than the other.

It’s important for you to implement BOTH types of jealousy on your ex if you want to have the maximum results.

But before we get into that lets talk a little about something I like to call “the scale.”

Every type of jealousy ploy you attempt can be plotted on this scale. In fact, as I continue to teach you throughout this article I am going to be giving you a few jealousy techniques that you can try out.

In addition to teaching you how to use those jealousy techniques I am going to plot them on the scale for you so you can see where they fall. Just as a quick recap,

Indirect Jealousy: A technique where you are trying to make your ex jealous without talking to him or her.

So, this may seem confusing at first but I want you to take a moment to read this article I wrote.

You didn’t read it, did you?

Well, in it I cite research where a graduate student found that close to 90% of exes will “Facebook Creep” on their exes social media profiles.

This has definitely consistent with my own findings over the years.

If your ex is going to check up on you then that means, in a way, you can control the narrative of what they are consuming related to you.

This makes it the perfect proving ground for indirect jealousy.

The key to indirect jealousy is to lead your ex in the direction you want them to go but don’t actually show them what’s at the end.

Last year I was on the phone with a coaching client and she was telling me an interesting story of a picture she posted on Facebook.

Apparently she had gone out to eat with one of her guy friends and took a picture of what they were eating.

It just so happened that she took the picture in a way that included her friends arm at the top of the picture.

Anyways, she posted the picture to Facebook and then a few hours later got this text from her ex, 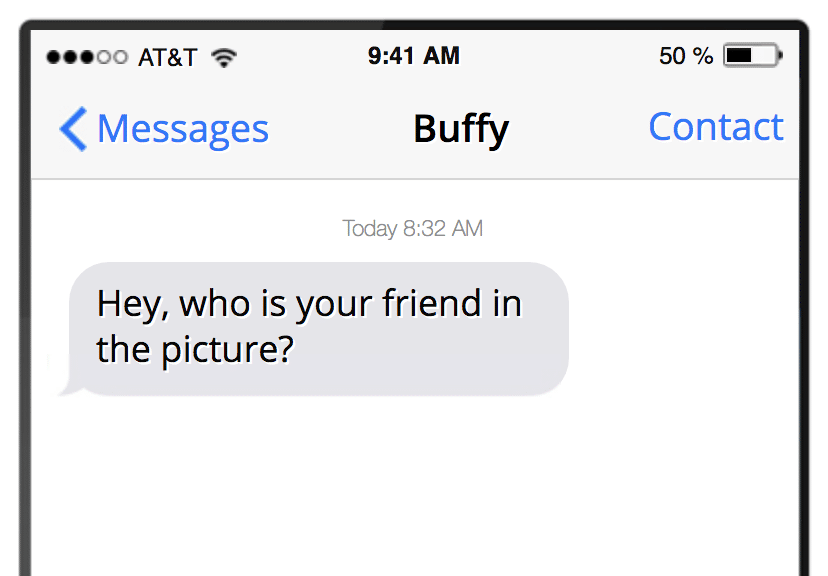 Her ex is clearly jealous, right?

Here’s the best part. When I shared this story with my private support group the “arm picture” was born and spread like wildfire, This is a perfect example of how indirect jealousy should be used.

It’s also as indirect as you can get,

So, now that you have an idea of what “indirect jealousy” is lets move on and talk about the other side of the coin.

4. Master the Texting, Snapchat and WhatsApp Based Strategies (Direct Jealousy) This is where we are talking directly to our exes and say something that will ultimately make them jealous.

Now, this is where I tend to have some philosophical differences than my peers.

I am a big believer that less is more.

Some of my peers will have you believe that if you send a text or snap like this, That, that is the best way to create jealousy with your ex.

I actually think that’s the dumbest way that you can use direct jealousy.

I think that you can employ a little bit of what I taught you above in texts to your ex.

Lead your ex in the direction you want them to go but don’t actually show them what’s at the end.

In other words, you should be doing a form of indirect direct jealousy,

Notice how it isn’t so far skewed to the direct side like the text above certainly was but it isn’t exactly indirect either.

It kind of skews that grey area.

Here is an example of a way you can do that, Notice how you don’t specify the gender of that friend and how the movie needs to be romantic by nature.

The are the bread crumbs that will eventually lead your ex down the following path, Do you see how such a simple text message, if properly constructed, can lead your ex down a path where they start thinking thoughts that are consistent with someone being jealous.

I learned a long time ago that if you force someone to think a certain way it’ll backfire. It’s a lot more powerful if they come to conclusions on their own.

The same is true with jealousy.

If you can lead your ex down the path and have them come to their own conclusions it is way more powerful than forcing them to feel a certain way.

Is Your Ex Trying To Make You Jealous?

The Best Statuses To Make Your Ex Jealous

Why Is My Ex Jealous That I Am Dating?