We’ve all been in breakups where we wish we could take it back, but is your ex wishing he could take this breakup back?

Today, I’m going to take you through six signs that your breakup is NOT permanent.

Before I get into the signs, I want to be clear that I’m not just pulling these out of a hat.

I googled what some of my peers had to say on this topic, and I was disappointed to see their suggestions.

It seemed like they just made stuff up that sounds good but that doesn’t really explain how humans work.

My observations are based on real-life client success stories that I studied to pin down the exact behavioral changes people exhibit when they want their ex back- that is, the breakup isn’t permanent.

The following signs are based on real-life scenarios and real-life success stories!

Sign #1: Your Ex Invests A Lot Of Time Into You

Ask yourself how much time and energy your ex is putting forth into you?

This isn’t just about them having one three-hour long conversation with you because that’s not really proof that they’re “investing” time in you.

Their behavior needs to be CONSISTENT.

Your ex should be having long conversations with you over an extended period of time.

Of course, they won’t always be having three-hour chats with you, and they might even go away for a day or two.

As long as the conversations are consistently long and involved, you’re good.

This time investment can be through text messages, phone calls, or real-life interactions.

Anything that shows they’re willing to put aside a big part of their day to talk to you means that they still care.

Let’s say your ex is investing a lot of time talking to you, but what if all that time is just negative?

What if you’re just fighting and arguing about things?

Such instances don’t really signal the best chances for a non-permanent breakup.

You should be aiming for meaningful and positive responses.

Generally speaking, the response should not be a short or one-word response because that doesn’t really mean much.

If your ex keeps replying to you with words like “cool” or “That’s awesome,” what are you supposed to do with it? 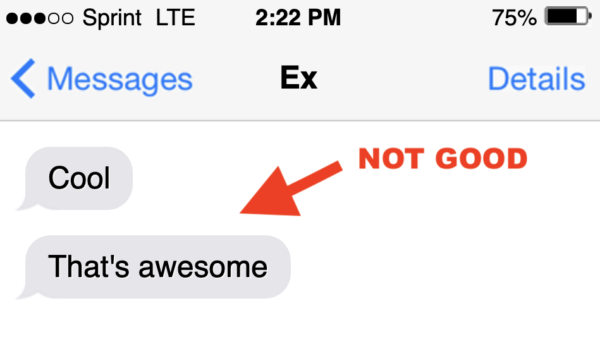 Let’s pretend you reached out to your ex with a text saying:

“You are not going to believe what happened to me.”

This is a pretty decent pattern disrupter/hook to get your ex engaged, but the usual response is “What happened?” Well, imagine your ex responds with:

“Actually, you’re not gonna believe what happened to me…”

And they go into a really long story about their day. That’s the kind of response you should be looking for because it’s meaningful. The more long, meaningful exchanges you have, the more likely it is that your breakup is not permanent.

The best part of my job is that I get access to so much unique data that no one else really has, and that gives me concrete statistical figures about the breakup/patch-up process.

For example, did you know that the average rebound relationship usually lasts between 5.2 months?

Did you know that the average success story we have will happen between months 3 and 6?

Basically, you need to be patient if you want your ex back, but how much patience is too much?

What happens if a year goes by and there’s still no sign of getting your ex back?

Generally speaking, we’ve seen that your chances of getting your ex back get significantly lower after a year has gone by.

Now I’m not saying that it’s impossible to get an ex back after a few years, but the odds of that happening are definitely stacked up against you.

These consistent failures leave them with only one choice – moving on.

It’s only after they move on and do something new with their life, such as dating someone else or leading a career shift that their ex starts to notice them again.

Waiting that long isn’t the point of this article, though. Just know that in general, the first year after a breakup is when your chances of getting back together are the highest.

Once that one-year mark hits, it can be extremely difficult to get your ex back using traditional strategies.

Sign #4: Your Ex Randomly Calls You Asking For A Meetup

The idea of the “pendulum swing” is very important to understand here.

Think of it like this – when you go through a breakup, you’re a mess of lots of different emotions like anger, sadness, grief, depression, etc.

Sometimes odd emotions like happiness and relief might slip in there too. This same “pendulum of emotions” is happening to your ex.

Your ex might be over the moon about moving on one moment and incredibly sad and lonely the next. In our success stories, when exes reach that sad point in their emotional swing, they’ll call and ask to meet up in person.

This will happen multiple times, especially during the no contact rule.

This is actually so common now that we mentally prepare our clients for it, so they’re not shocked when their ex reaches out trying to meet up.

The question to you is -should you say yes to meeting them?

Some exes use this meetup to beg to get back together while some just use it as a hookup or booty call. How do you know when to respond then?

It’s all about the timing.

If you are in the middle of a no-contact rule when your ex is reaching out, then you should ignore him, unless he flat out says he wants you back.

If they’re randomly calling you for a meetup after the no contact rule is over, I think you should go for it! That’s the time when most of the magic happens because your ex has seen what he’s missing.

However, make sure to at least build a foundation of trust and attraction before you see them again, so you’re sure they have a reason to want you back.

This is a sign I see most of my clients going through.

They’re depressed and don’t know what to do with themselves, so they start sharing sad stuff on social media to tell the whole world they’re not doing well.

That’s NOT a good look on anyone.

My focus is always stopping my clients from doing those things, but the same thing applies to your ex.

If they are doing the same type of behavior without you, they’re probably pretty broken up about it.

You might be asking yourself why they’re so torn up when they’re the ones who broke up with you.

Most of the time, when your ex breaks up with you, they paint themselves as the victim.

They literally make themselves think, “look what YOU made me do. Look at the pain you’re causing me.”

The irony is that they’re the ones who caused the breakup.

So, don’t be shocked if you see all these conflicting messages and social media reactions from your ex.

In fact, one of the clients on our private Facebook community shared that her ex actually wrote a whole rap song about how happy he was after breaking up with her.

This woman actually got her ex back!

A couple of years ago, we got this incredible success story that was so interesting I actually screenshotted it so I could look back at it for inspiration if I ever got stuck while writing an article or making a video.

It’s an important lesson about what your ex is thinking after a breakup while they’re still into you. Now, that message really is the perfect example of your ex drooling over you from afar.

I want to focus on the first few lines especially:

“Then I saw you again. You looked so beautiful, you looked so confident, you made friends, you got so impressive in Reflection, you made me fall for you all over again”
This message shows how impressed her ex was with her ability to grow from the breakup. She actually bent the breakup to her will, and that made him jealous to the point he couldn’t imagine his life without her.”

Ultimately, this is all about the Ungettable mindset.

It’s about becoming this super confident untouchable woman that every man would want… including your ex.

Sometimes I get frustrated with new clients because they think if they simply follow the rules without putting in any effort, their ex will drool over them. That’s not how this works.

You need to actively put in the work to put yourself in a position where your ex wants you back.

Of course, some people can get lucky, and their ex can come back after realizing the error of his ways, but for most of our clients, that’s not what happens. You need to put some work in for your ex to put you on a pedestal again!

Breakups aren’t always permanent, and these signs are a great estimate to judge if your ex is regretting the breakup:

15 thoughts on “Signs Your Breakup Is NOT Permanent”