I can’t tell you how many times a woman, who clearly wants her ex back, freaks out with excitement upon learning that her ex boyfriend wants to sleep with her,

Chris, he just told me that he wants to sleep with me… should I do it? I feel like I want to do it.

Is there a right or wrong answer?

I have been doing this for over half a decade and I can tell you without a doubt that there is a right answer on if you should sleep with your ex boyfriend.

But what is it?

Well, that is what this article is all about.

What I would like to do is use all of my data and experience to help you make an informed decision on if you should even consider sleeping with your ex.

Of course, if you have never met me before then you are probably sitting there and wondering,

Why should I even listen to you?

Hi, my name is Chris Seiter, That picture looks kind of fake, doesn’t it?

I am not going to lie it is probably the most bada$$ picture I have ever taken in my life and I had to pay professional photographers to get it (on my wedding.) The truth is that I wished I looked like that every day. Ok, all kidding aside the reason you should listen to me other than the fact that I have a pretty awesome baby is I probably have more data on breakups than most of the other experts out there.

But most importantly I am in the trenches daily and I have dealt with this exact situation of exes sleeping together more times than I can count.

So, what does my experience and data around this topic say?

“A breakup occurs leaving the woman desperate to get her ex back. In that desperation the woman talks to her friends who immediately tell her to move on. So she tries but ultimately can’t get his warm touch out of her head. She decides that she can’t count on her friends anymore and decides to go to the one place where she knows there is help,

After poking around on there for a few hours she stumbles across Ex Boyfriend Recovery. Immediately upon finding this site angels come down from the heavens, I think you get the picture!

So, she comes to Ex Boyfriend Recovery and reads the amazing content and something clicks within her mind. She decides to implement strategies like The No Contact Rule and Moving on Without Moving On.

Luckily, after some time she starts seeing some success and builds some real rapport with her ex.

It’s exciting to her but then it gets even more exciting when her ex suggests that they should sleep together.”

Does this sound familiar?

Now, in my experience a lot of women do end up sleeping with their exes and I think that is made clear from a scientific poll conducted by The Associated Press where they queried men and women on if they have ever slept with an ex,

You can see there that 32% of people admitted to sleeping with an ex after a breakup.

But you have to consider the state of mind of those people isn’t exactly the same as yours.

You see, they are talking about exes in general.

By the time many of these people were quizzed they could have been completely over their breakup whereas you probably aren’t. Therefore, people with your state of mind are probably more likely to say yes.

And I can actually understand why so many women do it if they want their exes back.

They are thinking that if they sleep with their ex that he is going to get drawn in and eventually commit.

Are Men Likely To Commit After Sex With An Ex?

This is what it all really boils down to, right?

I mean, you are probably not considering sleeping with your ex just because, right?

(No judging if you are.)

It’s really funny but men and women have very different views on sex.

You see, I have always been of the belief that men are far more prone to casual sex than women. In other words, most men prefer sex without commitment.

And I have to say that my work with women through Ex Boyfriend Recovery has definitely backed this up.

I find that more often than not women who are wanting their exes back have this strong belief that if they have sex with their ex he is going to commit to her. They think it’ll be the final thing that pushes him over the edge.

But they aren’t looking at things with a broad view.

Instead, women can get stuck in their own paradigm.

In the last 11 minutes I ran a quick poll over on our Private Facebook Group where I asked women who takes sex more seriously in a relationship. Basically I was trying to get to the bottom of who they thought attaches more value to sex, men or women.

(It’s pretty cool to see how responsive our little community is.)

Even though it is super early and there are still more votes that are going to come in here were the results,

Pretty strongly in favor of women, wouldn’t you say?

In other words, the women in the private support group believe that they take sex more seriously than men and that makes total sense. It explains why so many women believe that sleeping with an ex is the right call.

Because in their mind they attach this amazing value to it.

But they forget that men view sex in a different way.

There was a famous study done in 1989 where researcher trained men and women to go up to a member of the opposite sex and ask them a simple question,

If you had the opportunity right now would you have sex with me?

This just goes to highlight how men don’t necessarily attach the same value to sex that you do.

It also goes to explain why I have never seen an immediate commitment from a man after sex.

I have been lucky enough to have a lot of personal experience in helping women with this situation.

And the data I have seen points in one clear direction.

The vast majority of women who sleep with their ex do not get a commitment out of it. Instead, they put themselves in a worse position and often times can get so emotional that they ruin any progress they have of getting their ex back.

Here are the two things that I see unfolding that happens a lot after a woman sleeps with her ex.

I’d like to talk a little about each of these outcomes so you can gain some insight into what is going on in his head to have him act this way.

Why Won’t An Ex Call You Back After Sex? 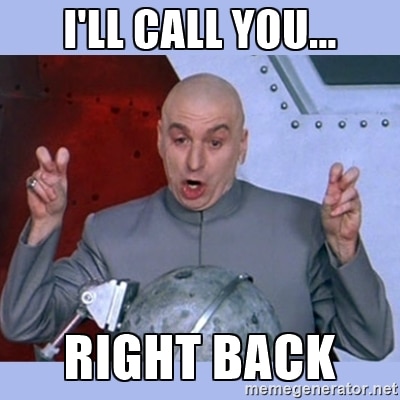 Usually when I am faced with questions like these I like to put myself in an exes position and ask myself,

“What would have to happen in order for me to act this way? What would I be thinking?”

This way I can give honest accurate feedback.

So, I am going to do that for you here.

If I slept with an ex and didn’t call her immediately afterwards I might be doing it for two reasons.

Usually men can be pretty stubborn and they don’t want to seem like they are over obsessing.

Now, I will say that out of all the outcomes this is maybe the most positive and also the least likely.

The second reason is unfortunately the most likely,

Reason #2: I got what I want already

One thing that you will learn about my teachings here on Ex Boyfriend Recovery is the fact that I am of the belief that a lot of men fall in love with the chase.

They love the build up.

One of my best friends growing up put it best,

“The chase is the most exciting part. Everything else gets boring after that.”

Now, what do you think he was referring to when he talks about “chase?”

Well, he was actually referring to sex.

And if you just slept with your ex then he already has what he wants.

There is no more chase.

Why Would An Ex Try To Set Up A Friends With Benefits Situation After Sex? Now, I don’t want to scare you but this is probably the most common outcome that I see happen from women who are having sex with an ex.

You see, the only thing greater than “the chase” for men is a consistent partner to have sex with.

One thing we already know about my sorry gender is the fact that men are much more open to casual sex than women.

In fact, I find that most exes would prefer it.

Shouldn’t having sex with a partner who you are in a loving committed relationship with be more powerful?

Well, in theory it should but that theory is a little flawed in the fact that it doesn’t take into account men who are freaked out about commitment.

You see, to a commitment-phobe a loving committed relationship can feel like a prison.

Friends with benefits is almost preferred in cases like that.

Now, I can hear you saying,

But Chris, my ex isn’t a commitment phobe?

I would actually disagree.

Your ex is a commitment phobe to YOU!

He is your ex and he is going to look for any excuse to not date you again.

That is what makes getting him back so challenging.

Should You Ever Sleep With Your Ex?

The answer to this question is pretty simple,

You should not sleep with your ex

But what if you already did?

What are you supposed to do then?

Well, I want you to get one principle through your head.

I cited a study from 1989 above that basically proves that men are the ultimately horn dogs and love casual sex.

But that study itself was flawed.

Well, it asked women to randomly go up strangers (who were men) and ask them if they would have sex with them.

But the mere act of having a woman do that is an indication to a man that she is “easy.”

Men will have sex with “easy” but they won’t value “easy.”

You don’t truly start appreciating something until you see first hand how hard it is to achieve. In fact, it’s the easy things we take for granted.

Sex is the same.

If you make a man work for it or for you he is more likely to value it or you.

The more you can get a man to invest into you the more he is going to value you so it’s simply a function of making sure you get your ex to jump through enough hoops to value you.

Oh, and don’t sleep with him until you have a commitment from him 😉 .

24 thoughts on “My Ex Boyfriend Wants To Sleep With Me… Should I?”