I’m willing to bet that most of you have gotten at least one text from a guy that just says,

I know my first thought would be,

“Seriously?! You couldn’t put more effort into that?” Where as if he had texted something like,

“So, I saw that you are going to the BlahBlah concert. I had no ideas you liked the BlahBlahs. How did you get into them?”

I don’t know about you but I would be 200 times more likely to respond to the second one. Wouldn’t you?

There are some texts you are more or less likely to respond to. Guy’s operate the same way.

What Has to be in a Text to Get a Guy to Respond?

You may not even know what your reasons are.

But, I can tell you what reasons a guy has for choosing to respond to a text.

4 factors play into actually getting a guy to respond.

Let’s look at some examples of these.

“Can you keep a secret?” This taps into his curiosity.

Speaking from experience, all men love a little mystery.

The follow up conversation should carry on with this mystery. 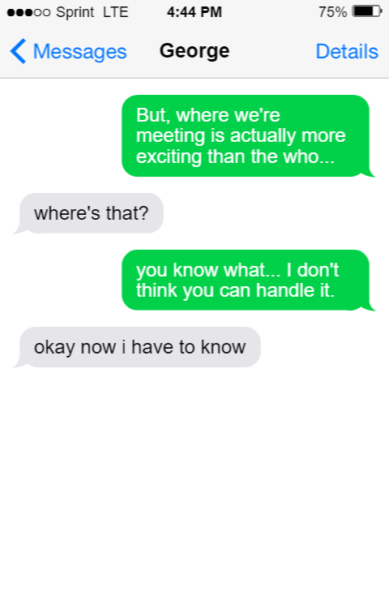 Have you ever asked a guy to help you open a jar that’s on too tight?

This is the classic damsel in distress situation . It speaks to a man’s masculinity, the ability to do something you can’t.

The desire to play the hero is a hard one to fight or any man.

“I have a confession to make.”

Now, this one taps into his curiosity just like the first one. Just remember, you have to make sure that you follow it up with something that is actually interesting.

Don’t go confessing that you have a crush on him or anything. That is what he expects.

“I have an extra ticket to go see the BlahBlah Band. I thought you might want to go.”

This one is a double edged sword. He will want to say yes whether he is into you or not. So, his reason for agreeing will be hard to discern. And you’ll be tempted to dwell on it.

Up until you guys meet to go to the concert, you have the option to talk to him about the band, the concert, and even just to make plans.

“I’m having trouble choosing a dress. Can you help me?”

Of course this would be accompanied with pictures from inside the dressing room.

This would be one that evokes his passions. Not only are you showing him pictures of you looking good, you’re also giving him a sense of control. He will get a sense that his input holds some level of sway over your decision.

“There’s something I’ve been wanting to tell you.”

This one is one to use moderately. It can have a similar effect as the “We need to talk” text that we all fear receiving. Being mysterious will almost always work in your favor. If you use this one, try and respond quickly as to the nature of the text.

Hey. Sorry I haven’t responded to you. I was in the shower.”

When you don’t respond to a text right away, you send the message that you might have better things to do than wait around for his response. It also doesn’t hurt that now, he’s thinking about you in the shower.

“There’s a shady guy parked outside of my house.”

Again, you’re tugging on his desire to play the hero. Every guy wants to be someone’s hero. Now, I’m not saying he’ll rush right over. That isn’t the goal here. The goal is to get him to respond. In all likeliness, he’ll continue texting with you till you figure out who this “shady guy” is.

Maybe he turns out to be a lost pizza guy. Who knows. It just provides you with a reason to have a little back-and-forth.

Here’s a video that has a little more information about getting a guy to respond.

Common Mistakes When Texting a Guy

Okay, now that you know how to get him to respond to that first text, we need to talk about how to keep the conversation going in a favorable manner.

Lets review what mistakes you should avoid following that first text.

We’ve all had those conversations where the other person refuses to participate. One word responses are a sure-fire way to stop a conversation in it’s track.

The best way to go about this is to not only avoid one word responses, but to use open ended questions to keep the conversation moving forward. If he’s answering in one word answers, it’s possible you just chose the wrong convo to draw him in or maybe he’s just busy.

Don’t panic and don’t try to force the conversation to continue. Just wait for a bit and see if he follows up, if not, leave it be and try again another day.

If you don’t get a response, or the guy doesn’t seem overly eager to talk at the moment, don’t push things. Wait until he responds, even if it takes days, to carry on the conversation.

Do not keep texting repeatedly. Neediness is not attractive.

Neither is a big pile of blue texts… You see, there is this thing called Tide Theory.

There is a high tide and a low tide.

High tide is exactly what it sounds like. The tide is high. There is lots of water to swim in and it’s probably safe to dive.

Low tide is where there’s not much water at all. You can see the bottom and it would probably be more fun to sit in your bathtub at home.

If he’s actually responding in a steady manner, then it’s safe to swim, I mean respond.

But if he’s not responding, don’t go diving off the deep end and going overboard.

The beauty here is that the tide can change any minute and it can surprise you. so if he’s not responding now, that doesn’t mean he won’t respond later.

Patience is your friend here.

Overt sexuality is not attractive either.

Being flirty is one thing, but being overly sexual can undermine your guy’s respect for you. If you’re going to flirt, use a light hand.

This is where the mystery comes in.

You want him to constantly have to imagine your worth.

If you are throwing yourself at him, he won’t. There are two types of guys in this world, the ones that think they deserve everything and the ones that don’t.

If you throw yourself at a guy whose attention you want, he’ll start to formulate an opinion of you.

The guy who has a big ego will think, “oh she must throw herself at every guy she meets. Why would I want to be with her?”

The guy with a low opinion of himself will equate your worth with his. “If she wants me, there must be something wrong with her.”

The thing with being lightly flirty is that he’ll be too  busy being curious that he won’t consider these things. He’ll be two into the conversation to make that jump.

That’s why you have to have a plan to follow up after that first text.

It’s the beauty of texting. You have time to actually consider your responses rather than in person where you can easily put your foot in your mouth.

What’s in it For Him?

Would you want to keep talking to someone who never talked about anything you were interested in?

I wouldn’t. It’s unlikely that you will get much conversation out of the guy if you don’t take his interests into consideration.

A Failure to Attract from Afar

This is a mistake that a lot of women make. You can’t be mysterious in text if you post every single thing that happens to you online.

There’s no mystery in that.

He has no reason to talked to you if he can just go online and see everything that’s happened to you for the last 14 years.

If you post something, make sure it’s interesting. 5 thousand bathroom selfies every morning are not the way to go here.

If you go on an adventure, post a few photos and a funny story about the trip. Don’t post all 574 pics you took of everything with a play-by-play of every single leaf you step on.

This should be handled similar to the texting. Post something to peak interest, but leave yourself open to tell some cool stories if he or anyone else shows interest in it.

This is the easiest way to shoot yourself in the foot.

Don’t assume he’s into you.

Until he openly expresses interest in you, it could go either way. A lot of the time women just assume he’s into them because he’s talking to her at all. This is when they stop putting in effort.

But the dating scene has changed today. Men talk to as many women as they can until they decide on one. Most of them put that off as long as they can.

That is why the need to keep things interesting is so important.

We covered a lot today. So, let’s touch base on what exactly you should be doing to initiate a conversation.

Every initiation must tap into one of your guys baser instincts. That means you should play into:

And you should avoid making the mistakes most women fall into.

Don’t use short answers, and stick to open ended questions. This is a conversation, not an inquisition.

Don’t bury him in texts. Match his enthusiasm. If he sends one text, you send one text.If he sends two, then you can send two.

Don’t be overly sexual. Flirting is one thing. Texts worthy of 50 shades should be avoided.

Don’t be self-absorbed. Include his interest in the conversation or he’ll lose interest.

Don’t forget to diversify your efforts. You can’t just be cool and collected when you talk with him. You need to reflect that same attitude on social media and when you run into him in person.

Don’t assume he’s into you just because he’s texting you. (or not into you if he doesn’t respond) Just don’t jump to any conclusions and be patient. Patience is key.

Take these tips and get your guy talking.