There’s nothing worse than pouring your heart in soul into trying to get your ex back only to find out that you are wasting your time.

In this post I’m going to be teaching you the top six signs to keep an eye out for that will tell you that you are wasting your time with your ex.

Many of these signs are things that I don’t see anyone talking about so you are in for a treat.

All of the signs that I am going to be talking about are taken from real life situations that I’ve seen first hand.

All of the signs I am about to talk about I have surfaced from real life situations where one party has failed miserably to try to get an ex back. In fact, some of these signs I have taken from my own clients.

Now, I do want to say that this article is going to get a bit dark and it may seem like there isn’t a lot of hope if you find yourself in a situation where these signs are present.

Don’t be fooled into thinking that there isn’t anything you can do.

There is, and I’m going to show you what you can do a little bit later.

But first things first, let’s look at the six signs,

Well, what I’d like to do now is go over each one of these signs so that you understand it a bit more completely. Three years ago I wrote this beauty. In it, I talk about the importance of not taking everything your ex says at face value.

You see, through experience I’ve learned that usually when an ex is explaining their reasoning for breaking up with you they will lie to you.

“I’m not ready for a relationship”

Only to move on to some new person five minutes later.

That’s when I thought up the idea of the words vs. actions theory.

And for you visual folks, 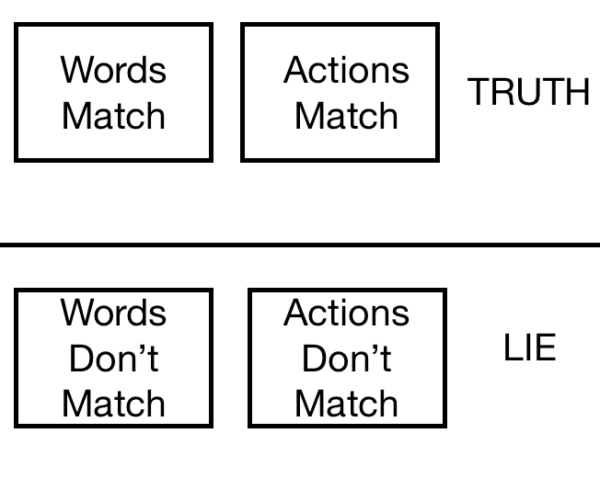 Most of the time people look at this from the context of trying to get an ex back.

In other words, they are looking for positive things.

However, you can also use it to look for negative outcomes.

Let’s say that you and your ex go through a very bad breakup and they tell you that they never want to see you again.

Over the course of the next few months you notice they do nothing to establish communication and flat out ignore you every time that you do attempt to reach out.

That simple act matches what they said, right?

Is This Process A Waste Of Your Time?
Find Out Here You shouldn’t be in this situation ever.

Everyone with a normal sense of right and wrong knows this.

And yet, this is something I see with individuals in our private group often enough to warrant a mention in this article.

There are two points that I want to unpack here.

The Theory Of Investment

I feel like a broken record saying this as I’ve stated it multiple times throughout this website but investment is one of the most important aspects to look at if you are trying to get a commitment from someone.

In fact, studies show that the more an individual has invested into a relationship the least likely they are to leave the relationship.

Consider an ex who is married for a moment, Not only should you not be in this situation to begin with but your ex probably has invested things like,

Into this commitment with their partner.

No matter how you slice it they probably have more invested into their marriage than they do with you. Therefore, it’s highly unlikely they will leave for you.

But let’s pretend that, that’s exactly what they did.

They left their marriage to be with you.

That leads me to the second point I’d like to make.

What Makes You Think You’d Be Any Different?

If your ex is willing to cheat on their marriage with you what makes you think you won’t get the same treatment in the future?

Oh, and here’s another fun little statistic for you.

Why do you think that is?

Personally, I believe it’s because they’ve already been through the first divorce and that second and third one is a little easier. 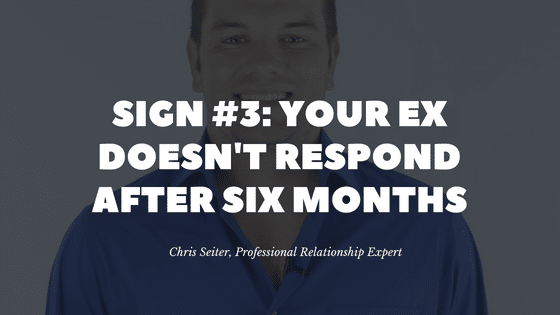 Usually when I talk to people who purchase my book there is one of two questions that I’ll consistently receive from them.

Do I have a chance?

How long will it take to get my ex back?

As for the second question, well that’s where things get really interesting.

So, what happens if you break that 6 month threshold and haven’t heard anything at all from your ex?

Oh, and to make matters worse you’ve tried reaching out to them but nothing seems to get the response you are craving.

In fact, I’d go as far as saying your chances are so low in this type of a situation that it might be worth giving up.

It’s impossible to get an ex back without talking to them or having any type of communication with them. It’s the lifeblood of how this process unfolds.

There’s not much more to unpack here so let’s move on.

Sign #4: You’ve Been Pursuing Your Ex For Years And They Keep Stringing You Along One of my favorite quotes of all time,

It’s from “The Count of Monte Cristo” and I think it’s very relevant to what I am about to talk about here.

Let’s say that you and your ex dated 3 years ago.

For you, it was the greatest relationship of your life but your ex didn’t seem to think so as they broke up with you.

Oh, but they wanted to remain friends and you were more than ok with that, As the years go by you wait and hold out hope that your ex will wake up and smell the roses and be with you.

Along the way you get certain mixed signals that hold you over.

Barney Stinson from How I Met Your Mother put it brilliantly when he described being on someones hook,

It’s when someone strings you along without any intent of ever committing to you.

This is where the “actions vs. words” theory can come into play.

If your ex makes these statements saying that there might be a future for you but they do nothing to back that up with actions.

Sign #5: Your Ex Hasn’t Proven Things Will Be Different I estimate that around 50% of my success stories break up again once they get back together.

Well, it’s because nothing changes the second time around.

Let’s say that you broke up with your ex because they were jealous any time you talked, very innocently, to someone of the opposite sex.

This sparked a lot of arguments between the two of you.

When you eventually got back together, even though it took a while to surface, this same behavior started causing arguments between you guys again.

Don’t expect to have a successful relationship unless something has changes.

Again, not much more to unpack here so let’s move on.

Sign #6: You’ve Been Full Out Blocked For More Than Six Months 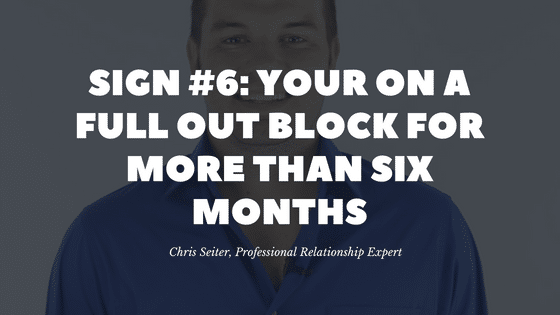 It’s an important time frame to understand because it’s sort of the witching hour but let’s not get off topic.

With sign #3 I talked about how if your ex doesn’t respond to you after six months it’s a bad sign.

This takes that same line of thinking a step further and focuses on those individuals who have been blocked by their ex.

Now, if you read my post here on blocking you’d know that there are different levels to being blocked by your ex.

There is the partial block where your ex blocks you in important places but you still have a way of contacting them.

And then there is the frightening full out block. This is where your ex has blocked you in every way imaginable in every medium imaginable.

You have no way of directly contacting them.

In my experience I find that generally speaking within six months your ex will unblock you just out of curiosity.

But if that doesn’t happen, if you’ve been blocked for six months straight with no way of contacting your ex it’s a very bad sign.

Let’s do a quick recap of everything you we learned with this article and talk a little bit about how you can dig yourself out of some of these situations.

Some of you may be freaking out after reading this article.

In many of these situations there are things you can do and I want to help you through it.

So, make sure you comment below and I promise I will get back to you 🙂 .