Lately it seems there is a lot of confusion on Ex Boyfriend Recovery when it comes to reaching out to your ex.

Some women think that the best way is through sending a text like this, While others think a phone call is the way to go.

Oh, and let us not forget the poor women who show up on their exes doorstep like this, 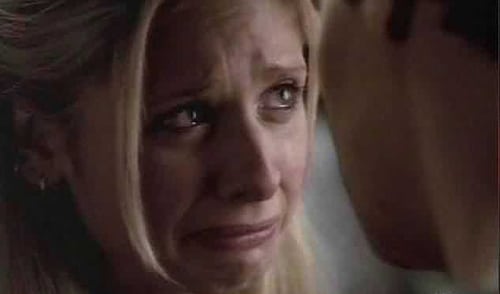 Hey, no judging, we have all been there.

But the question remains,

Is there a preferred way to reach out to an ex?

Well, I suppose it all depends on what you ultimately want.

Every time I take on a new client or do a new interview with a student the very first thing I ask them is,

What is it that you ultimately want to achieve when it comes to romantic relationships in life?

And it never ceases to amaze me on how most of the time women can’t answer that one simple question.

Usually they will ask me to clarify or give them an example.

Example = I want to meet the man of my dreams and get married.

Now, it may seem really strange that I ask that question but it’s really not.

Knowing the end goal helps me tailor a game plan that is suited towards achieving that “dream scenario” that they gave in their answer.

And I am going to use that same method on you right now.

I am going to simplify this for you since I know most of the women reading this website are going to fall into one of two categories,

Because how you reach out to your ex is going to ride on which category you ultimately choose.

I am going to level with you.

All that I am going to cover in this article is how to reach out to your ex if you want to get back into a relationship with him.

Well, because if you really want to get over your ex then you probably shouldn’t be reaching out to him.

The masses are screaming,

But Chris… I still want to be friends with my ex. What am I supposed to do then?

Well, I want you to consider something before you put all your stock into being friends with your ex.

Now, what is it that an addict will often do when they are going through withdrawal?

Well, you’ll find that they’ll often do anything to get a high.

And with a breakup “getting high” is the equivalent to engage in your addiction with your ex again. So, it is best to limit yourself if you determine that you simply want to move on.

It is also why from this point on I am only going to focus this article on how to reach out to your ex boyfriend if you are trying to get him back.

Are you familiar with the concept of a value ladder?

It’s something that most businesses use to try to maximize profits. It looks something like this, The basic principle behind a value ladder is that once a customer buys something from you, you should offer them something else of value and repeat the process until they won’t buy anything from you again.

Lets use McDonalds as an example and say you go there to buy a burger and only a burger.

So, you get to the drive through window and order your burger (YUM.) But what is it that they ask you next?

Umm.. mam would you like to order our world famous fries for a dollar more?

Oh, and they don’t stop there.

After you add on the fries the next thing on their value ladder is a soft drink.

So, even though you initially went to McDonalds for a burger they ended up squeezing some extra dollars out of you by moving you up their value ladder.

So, you get the basic concept, right?

Well, what if I told you that you could create your own value ladder for your ex boyfriend. 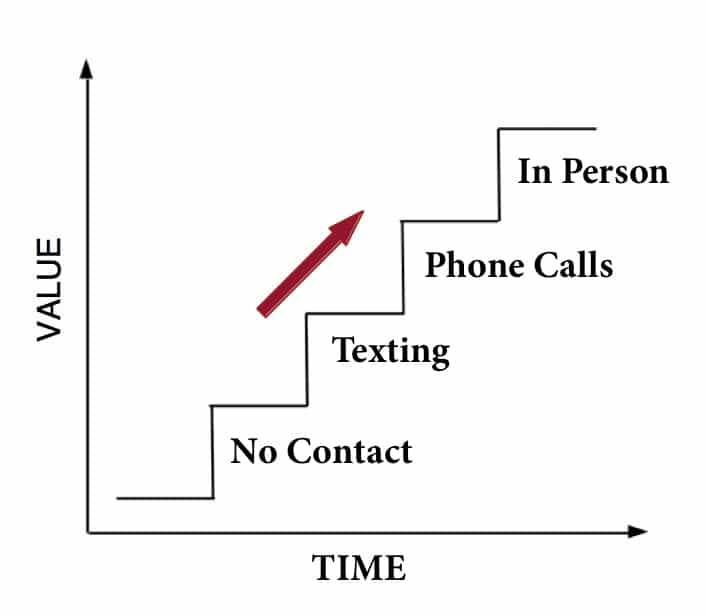 Notice that as you move your ex slowly up this ladder you are providing more value to him which in turn will make you more valuable to him.

But I also want you to take note of the fact that there are ultimately only ever two mediums where you should reach out to your ex.

(Remember, this article is only about reaching out to your ex. If you want more advice on talking to him I suggest you go here.)

Those two mediums are,

Now, I structured this value ladder in this way very specifically to ensure that you aren’t freaking your ex out by coming on strong too soon.

What I’d like to do now is zone in on these two methods of “reaching out” so that I can explain them in greater detail.

The Right Way To Reach Out Via Text Messages

So, before I get into the nitty gritty of texting an ex I do want to talk a little bit about the value chain above.

You may have noticed that there is one important step that occurs before you “text” your ex boyfriend, 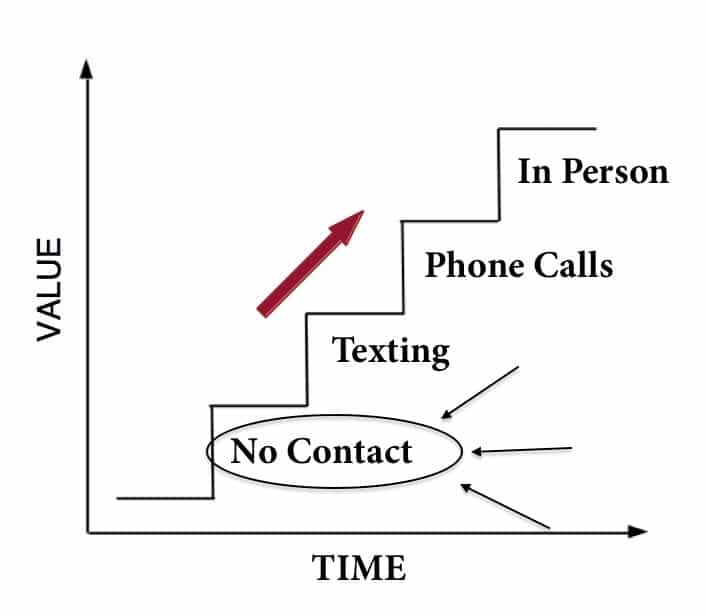 The no contact rule must occur before you even think about reaching out to your ex.

Because my team and I have found that over 70% of our success stories have utilized it in some way, shape or form.

In other words, the no contact rule is the foundation of which a successful “ex back” strategy is built on.

Without it the entire value ladder crumbles.

With it, it thrives.

So, you can kiss “reaching out” to your ex goodbye if you haven’t successfully completed it.

But let’s assume that you have completed it.

Well, then it is time to focus on texting your ex.

Now, I don’t know if you are aware of this but I work with hundreds of individuals trying to get their exes back every single day through my Private Support Group and one of the most prevalent questions I get there is,

What do I say in a text to my ex if I am reaching out to him?

Ultimately, I have found that a great “reach out” text to an ex consists of three main things.

Consider for a moment the end goal of reaching out to your ex via text.

You aren’t doing it simply to reach out, are you?

No, you are doing it because you want him to respond to you.

More than that, you want him to respond to you in a positive way.

So, you have to stack the odds in your favor any way you can and to date the most effective text messages that achieve that goal all have these three commonalities.

Let’s pick each one apart!

Component One: A Pattern Interrupt

What is a pattern interrupt?

Well, it’s not rocket science, I assure you.

It’s something that catches your exes attention instantly.

It can be something as simple as an “action phrase” like,

Or something as complex as a picture in a text like this, Ultimately the end goal is to make your ex do a double take on his own phone.

This is where things tend to get more complicated.

If your end goal by reaching out to your ex is to get him to respond then you are going to need a hook.

It’s basically something that makes your ex go,

I find a lot of women struggle with coming up with a hook because they have no idea on how to hook a man in.

Well, that is what I am here for.

There is a trick to coming up with your hook, you see.

It all has to do with you utilizing your knowledge about his interests.

Every man has one thing that he fanboys out over, It is your job to find that thing and use it as a hook to get him to respond.

For example, everyone knows that if you talk about Buffy The Vampire Slayer to me I will literally giggle and turn into a sixteen year old girl (even though I am about to turn 28 and I am a male….)

I mean seriously, I have put Buffy references all throughout this website (if you look hard enough.)

All you need to do is find your exes “Buffy.”

What I am about to say here isn’t revolutionary but human beings love being told stories.

So, condense one and tell it to your ex through text.

Ok, maybe it’s not that simple.

The best stories will find a way to incorporate the pattern interrupt and hook into them.

Take the funny text message example I showed you above.

What if you were to pair that with, All of a sudden the action phrase, the hook and the story are combined into one.

Now, isn’t this a text that you would want to respond to?

Reaching Out Via Phone Calls

Let’s move on to our final “reach out” method here, phone calls.

Now, when I say phone calls I am also including video chat software such as,

I find that most of the women I work with don’t have a problem reaching out via phone calls. Instead, most of their issues lie with making sure the conversation extends.

For example, a lot of the women I work with get on the phone and have nothing of value to say.

Now, the reason this is a huge problem is because when you have nothing of value to say you get caught up in these awkward silences and they can be… well, awkward, Once my team and I learned that so many women were having this problem we went on the offensive and started providing our clients with scripts of what to say on the phone calls.

The problem with that was most women can’t think quickly on their feet and so much of stimulating phone call conversations is bred in not seeming scripted so we quickly decided to change our game plan and instead started suggesting to our clients to enter the conversation with awkward silence fillers.

Go into the phone call with four or five stories written down that you can tell in the case of an awkward silence.

This way it seems like you are always contributing to the conversation in a very positive way.

Now, I don’t want to seem repetitive here but if you are going to tell your ex a story make sure it has the three components that we talked about above,

Remember, you don’t have to have it scripted word for word but it does help to write some of this down so you can go into the phone call seeming as natural as possible in an unnatural situation.

If you have any more questions about reaching out don’t be afraid to use the comments section below!

38 thoughts on “How To Reach Out To An Ex Boyfriend”