Today we’re going to talk about why your ex is acting so indifferent towards you.

First things first, let’s define what indifference or apathy is.

Indifference is a lack of sympathy or concern about you or your situation.

In other words, your ex really doesn’t care about you at all.

Now, most of my clients immediately panic when they are encountered with this situation as their mind runs through all kinds of horrible scenarios.

But one question they truly fail to answer is….

Is Your Ex Truly Indifferent Towards You?

You really only find out if your ex is indifferent towards you when you talk to them.

And for those of you who are newbies and aren’t familiar with my theory of conversations you can only really get four kinds of responses to any type of conversation.

Now the biggest misconception I see people having is that if you get three of these four kinds of responses, specifically neutral, negative, or no responses, your ex is bing indifferent towards you.

But what if I were to tell you that, that’s actually false.

Believe it or not, if you get a negative response from your ex, it does mean that they care on some level.

They cared enough to get angry at you and snap at you, but on some level, it means they care enough to respond, and they’re not indifferent towards the situation.

On the other hand, if you’re only getting neutral responses every single time you text your ex or your ex is straight-up ignoring you it might be a sign that they are indeed acting indifferent towards you.

This is where it gets fun.

We’re going to look inside the brain of your ex to see exactly why they are acting so indifferent towards you.

Why aren’t they responding to your texts?

Why are they only giving halfhearted responses?

Why Your Ex May Actually Be Acting Indifferent Towards You

Our research has found that there are three main reasons for why an ex will act indifferent towards you:

Let’s dissect each one of these to give you a clearer picture of what may be going on in your situation.

Reason #1: They Think They Are Above You

This relates to something I always talk to my clients about putting their ex on a pedestal.

Putting your ex on a pedestal is a really bad idea because exes have this uncanny ability to sense when you’re doing that and it makes them feel like they have the high ground over you.

They feel like they’re better than you and somehow “won” the breakup.

They thus think that talking to you is beneath them.

This happens consistently in situations where your ex moves on to someone else.

They have a lot of the “grass is greener” syndrome where they’re convinced that they can find someone better than you, so they find someone who, in their eyes, is a better partner for them.

Only time will tell if that holds true for them, but it’ll definitely make them indifferent towards you during that time.

Reason #2: They Think Talking To You Is Boring

One of the tell-tale signs of this happening is that when you get into a text conversation with them, they’re extremely responsive in the beginning, but they quickly lose interest and stop responding with the same enthusiasm, if they respond at all.

Why do they think talking to you is boring in the first place?

There can be two main reasons for this:

So, what’s the fix here?

Ultimately I think it revolves around your text message topic selection.

I’ve long been a believer that men respond to their interests at a much higher clip than something generally. As human beings we tend to be very self interested and that sentiment extends into our text conversations as much as anything else.

If you want more information on this concept I recommend you watch this,

Reason #3: They Think Talking To You Is Too Much Drama

Which means Going Nuts At Texting.

Your ex will probably even  see you as a drama queen they want nothing to do with.

I’m going to share examples from my real pre-marital life to prove this point.

Often times, when I would go on dates, I would have conversations with girls over text.

If they ever acted crazy, too needy, or just too drama-filled, it turned me off completely. I wouldn’t want that kind of high maintenance situation at all.

Again, not too much to expand on here.

Let’s turn our focus on to something a bit more challenging.

How Can You Turn Indifferent Responses To Positive, Meaningful Ones?

So now that you know why your ex might be acting this way, that doesn’t solve the main problem at hand.

In order for your ex to take meaningful positive action towards you, they need to feel something positive towards you as well, right?

Our overall goal is to take your situation and do exactly that!

There are two main things you need to know to can take an indifferent and apathetic ex and turn their feelings into positive ones towards you.

Let’s talk about those things now.

Thing #1: Understand Where Indifference Set In Throughout The Relationship

There must have been a point during your relationship where your ex started emotionally disconnecting with you.

You may have started noticing that your ex is taking longer to respond to your text messages.

You probably started getting this queasy feeling in your gut that something was wrong.

That gut feeling is a good sign that the indifference started during your relationship.

It’s funny, I recently did a podcast episode talking about this exact concept.

Thing #2: Understand The Idea Of Stability Vs. Mystery

If you’ve seen any of my YouTube videos, listened to my podcasts, or read my articles, this won’t be new for you.

But it’s SO important to your situation that it bears repeating every time.

Indifference often goes hand in hand with boredom. When something becomes routine for you, it no longer excites you, and you just become indifferent towards it.

That’s what happens in stagnant relationships too.

This is where the stability and mystery spectrum comes in. 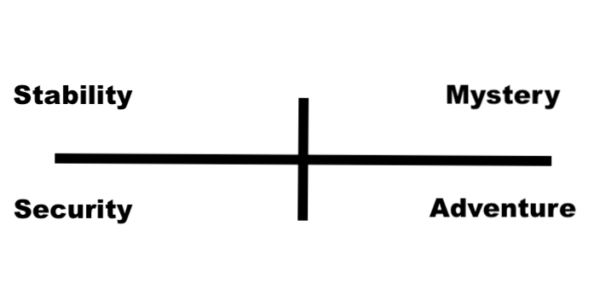 This scale refers to how human beings have two conflicting needs in a relationship – the need for stability and the need for mystery.

At the beginning of the relationship, these two balance pretty well, but as time goes on, most couples start to lean too heavily on the stability side, forgetting about the mystery.

You’re just sitting at home and watching Netflix, and that gets boring for them.

At the risk of complicating the equation even further, I have to stress that each ex has a different sweet spot for what their individual preferences are on the stability-mystery scale. Someone may thrive on adventure and mystery while someone else might prefer having a set routine.

For example, I’m generally a more stability-oriented person, but that doesn’t mean I don’t want some spontaneity in my relationship.

If you were to chart me on the stability-mystery spectrum, I’d probably fall at 65% stability and 35% mystery.

What are your exes stability-mystery percentages?

No, you don’t need to figure out an exact number for this.

Just think back and analyze what your ex liked more and see where you were lacking.

Maybe you got a little too complacent and stable in your current routine or maybe you grew a little too mysterious and forgot to offer them any stability.

How To Change Your Exes Perception Of You

Whatever you lacked is what you need to show an abundance of now. Your ex needs to see that his perception of you as the dull homebody or the excessive party -girl was wrong, and there’s so much more to you.

This is your opportunity to reshape your exes’ perceptions of you and make him see that your stability-mystery spectrum is much more similar to theirs than they gave you credit for. You can do this in multiple ways.

I would say that approximately 90% of people I work with fall into the “too stable” category. Maybe as time went on, they got too comfortable in the relationship and let go of the mysterious qualities that pulled their ex in when they first got together. So, whatever the case may be, I want to use stability as the example going forward because that’s what happens to most people.

If your ex views you as being too stable, you need to subtly highlight the adventurous things you’re doing as much as possible through social media or conversations with him over text or in person.

You may ask what adventurous things you should do or highlight…

Well, it’s simple. What’s the last thing your ex would expect you to do?

I’ll give you my example.

One thing my wife would never expect me to do is to go skydiving.

That’s way too adventurous (even life-threatening) for my preference, so if I were actually to go skydiving and talk and post about it, it would start changing my wife’s perception of me. It’ll come sort of like a shock to her system that opens her eyes to a new aspect of my life.

Find it and then subtly highlight it on social media.

Find another NEW adventurous thing to try out.

Not only will you be changing your ex’s perception of you, but you’ll also have lots of fun while doing it!

First off, find out if your ex is actually indifferent towards you (hint: if he’s giving negative responses, he still cares at some level).

Then, find out when and why the indifference creeped in during your relationship.

Once you know why the indifference came about you can work on getting rid of it by proving to your ex that you can be much more adventurous or stable than they think.