Yesterday one of my coaching clients asked me a pretty simple question,

How can I make my ex feel guilty if they broke up with me.

It’s a really interesting question because I had never thought to think about actively trying to make an ex feel guilty (you’ll find out why in a moment.)

So, I figured I’d write an article and film a video with my thoughts on it.

That’s what this is.

How To Make Your Ex Feel Guilty

Going forward I’d like to operate under a certain assumption and that assumption is that you are trying to get your ex back.

In other words, how does guilt fit into the overall strategy of trying to win your ex back and is it a good idea or not.

There are five main things I’d like to cover in this article. Grasp these five things and you should be well on your way to improve the odds of getting your ex back.

Trying To Guilt Your Ex Is Actually A Bad Idea

Look, I’m not going to sit here and deny that “guilt trips” can’t be effective.

In certain situations they can be.

Are you familiar with the term?

Opportunity Cost: The loss of potential gain from other alternatives when one alternative is chosen.

Essentially can you be doing something else besides a “guilt trip” that will yield better results than the one that you will get from a “guilt trip?”

The answer to that is yes.

But before I tell you what that alternative is let me make a case for why “guilting” your ex is actually a very bad idea.

There are two primary reasons for why I would stay away from guilting your ex.

Let me break it down for you.

When psychologists have studied how people responded to effective guilt trips they’ve found that people tend to have one of two reactions.

They will either avoid you or become very resentful about the fact that you are using guilt.

Now, last time I checked those weren’t exactly great things for getting your ex back.

In my humble opinion the risk is too great to use guilt.

Regret Is The Way To Go

At it’s core trying to get an ex back is all about convincing a human being to do something they don’t want to do.

Your ex currently doesn’t want to get back together with you.

That much is clear because you probably wouldn’t be searching the internet for answers on how to get them back if they were.

What we know about human beings is that we are very self interested creatures.

Now, what do you think I mean by that?

Put frankly, we are usually going to take the course of action that we think is going to be best for us.

So, if you look at it in these terms you have one main goal when it comes to getting your ex back, convince them that being with you is the best option.

How do you do that?

Regret is often a strong enough emotion to create action.

Are you familiar with what that is? Often my clients experience in trying to get their exes back looks a little something like this, All it takes is one small cause to get the party started and things just go from there.

A guilt trip is not a cause it’s an effect.

It’s something that you are going to enforce on your ex because of what you want.

Instead, what you should be focusing on is creating a set of circumstances to create regret within your ex.

Regret is their cause

It’s the first domino falling that will inevitably lead to your reconnection. 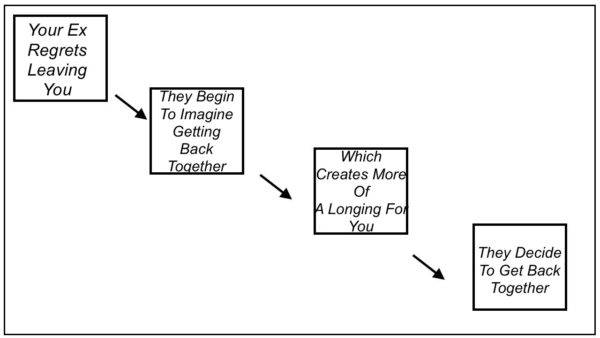 It all starts with regret!

Now, this begs an interesting question.

How do you make your ex regret their decision to leave you?

Well, you could probably watch this,

Or you could probably read this but in my opinion it boils down to three core concepts,

Let’s talk about those things now.

1. The Best Revenge In Life Is Massive Success

The best revenge in life is massive success

It just became our rallying cry!

In Ex Boyfriend Recovery PRO, I talk about the idea of the Gatsby Method which I coined after the great novel by F. Scott Fitzgerald, The Great Gatsby.

In the book, Gatsby tries to win his love back by throwing this elaborate parties and showing off his immense wealth,

The whole premise is predicated on the fact that people want what they can’t have and if you show them what they are missing out on without you they will be drawn back towards you.

Hence, the “gatsby method” was born.

This was what Frank Sinatra meant when he said that the best revenge in life is massive success.

But here’s where most people make their first mistake.

Instead of indirectly showing off their success they directly do it.

The worst thing you can do is something like this, Why is this such a massive mistake?

Well, that seamlessly transitions us to the next point I’d like to make.

The whole goal throughout this process is to make your ex regret not being with you.

But have you ever sat back and actually thought about how you actually start regretting something?

When I look at my own experiences with regret it often happens when something indirect makes me think about it.

I may be watching a movie and something in the movie reminds me of it.

I may be talking to a friend and they bring something up.

The point is that regret is often created indirectly.

In it you have someone who is trying to be direct about creating regret.

They are literally saying,

“I’m attending a concert by your favorite band.”

This isn’t exactly a “guilt trip” it’s more like a “regret trip.”

Now, if you recall a few of the points I made above about why “guilting” your ex was a bad idea.

Well, being very forceful about creating direct regret can have much of the same impact.

Instead, I often tell my clients to show, don’t tell.

What do you think I mean by that?

Instead of directly telling your ex about it, it’s actually more effective to show them the experience so they are literally watching it from afar. Remember, regret is missing out on something you wish you could have been a part of.

It’s all about opportunity cost.

It’s all about showing your ex that instead of doing the thing they are doing they should be doing this thing instead.

3. Consequences Are Important To Give

How often have you regretted leaving someone that you didn’t respect?

Chances are you can’t think of many examples, right?

It’s shocking to me how often I am coaching someone and they sit there and say,

“My ex did this, this and this to me”

And I’ll literally shake my head over the phone and think,

Why did you let them treat you that way?

Consequences are important to give because they make the other person respect you whether you believe it or not.

Let’s say that you have a dog.

It’s a cute one and you love it more than anything,

It’s just got one tiny problem. It pees and poops everywhere in your house.

What do you do?

Do you simply do nothing and let it keep ruining everything?

Most likely you’re going to give it a consequence.

People are the same way.

If you establish a precedent that it’s ok for your ex to treat you in a certain way they are going to continue treating you that way.

Instead, I advise my clients to give their ex a consequence to fit the punishment.

Let’s say that you are in the process of trying to get your ex back and they say something rude to you or maybe even tell you that there is no chance that the two of you will ever get back together again.

It’s actually a lot more common than you think for them to say something like that.

An ideal consequence to give them is to show them what reality would be like without you.

But whatever you do don’t tell them about the consequence, show them.