Specifically the right way to flirt with your ex after a breakup.

Yes, I promise you read that right there is such a thing as a flirting formula.

When You Should Be Flirting With Your Ex

Let’s talk about some of the basics when it comes to flirting.

Specifically when you should be flirting with your ex. I’m famous for coining the term value ladder.

Well, maybe not famous for “coining” it but I’m famous for applying the concept to the ex recovery process.

So, lets start with a basic question I’m often asked.

What the heck is a value ladder?

Put simply, a value ladder is an overall framework which should be used if you’re interested in getting your ex back. It’s the birds eye view game plan.

Here’s a quick picture if you’re more of a visual person. Essentially the goal here is to give people a visual map of how “getting an ex back” is supposed to work.

If you are still confused about what the heck all of this means then I highly recommend you read this post.

But that still doesn’t answer my initial question.

When do you flirt with an ex?

Ok, I want to show you something. 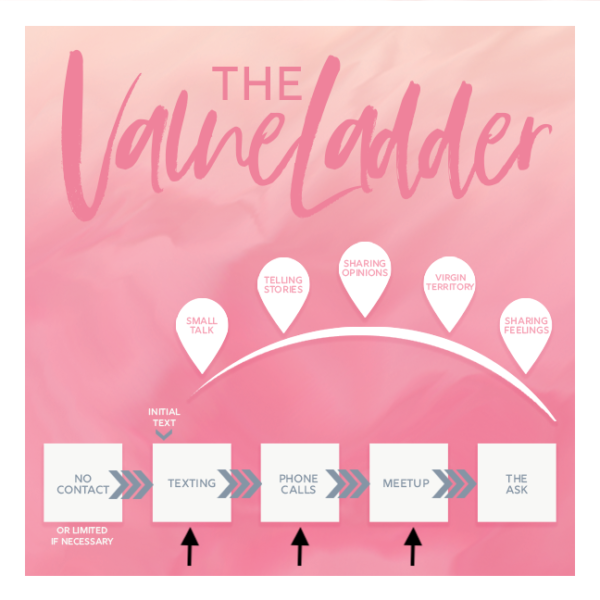 Do you see where I pointed the black arrows in the diagram of the value ladder?

Technically speaking those are the areas that you should be “flirting” with your ex on.

Now, it’s obviously a lot more complicated then just straight up flirting with them.

There’s a very specific way that you need to do it.

Which leads us to the second part of this article.

How Do You Flirt With Your Ex After A Breakup?

So, in order to explain the how I must first teach you something I like to call the flirting formula. I can’t really think of a great way to explain this without telling you a story to illustrate how it works so bear with me here.

First things first though, let’s talk about the factors in my actual equation.

“Attraction built” equates to anything that catches someone’s interest.”

This can be something as simple as a flirty text or something more direct like a sexy look across the way at a party.

Basically anything that you do or say that makes someone more attracted to you can be plugged in to the “attraction built” portion of the formula.

That’s the part that most people can do easily.

The next part is where they fail nine times out of ten.

Presenting a “challenge” is what makes you different from the rest of the women in the world.

You see, most women just “build attraction” and expect that to work for them.

But I’m not writing this article so that you are like most women. I want you to be extraordinary.

And in order to do that you need to make men jump through hoops to ensure that you are challenging to win.

How does one do that?

Allow me to illustrate.

Now, the story I’m about to tell you may sound a bit odd but I swear to you everything happened exactly how I’m about to explain it.

It also may be the single greatest example of “flirting” I’ve ever seen.

The Flirting Formula In Action

When I was twenty two years old I was invited to go out to a bar from my friend.

Apparently he had signed up for that dating website, Plenty of Fish, and snagged a date.

The girl invited him to this line dancing bar about twenty miles away in Galveston, Texas.

He was scared to make that drastic of a trip alone for some girl he had never met in person before.

He wanted backup so he called the best person he knew, me.

In all actuality, I think I was his last choice but my ego can’t take that.

Anyways, we get there to the bar and it’s heavily cowboy themed.

Everyone is dressed up with cowboy hats, jeans, boots and then you have us. Eventually he meets his date and things don’t go very well. The two of them just don’t click, probably because he was too afraid to come alone and brought me.

She leaves early and while my friend is bummed he is determined to salvage the night.

“Chris, why don’t we stay and dance. Maybe we’ll meet some chicks.”

Now, there are two things you need to know about me.

This proposition sounded like the dumbest idea in the world but it turned out to be pretty great for him, not for me.

You see, on the dance floor was our very own Ungettable girl.

All the men gravitated towards her and she played them all.

Dancing with this one, with that one leaving each new man excited and each old one confused as to why she left.

My friend hadn’t gone out to dance floor to try his luck because I refused to budge from the sidelines but I’d be lying if I said we both hadn’t noticed this Ungettable genie crumbling men left and right.

The more I watched her the more I realized that she had a very distinct pattern.

She would dance with a guy, excite him and then move on to the next available partner.

She was beautiful, yes, but when I noticed her pattern it told me she was also smart.

Women like this aren’t necessarily rare they are just unique and every man in that bar was drawn to her for it.

Then she did something no one was expecting.

She broke from her pattern.

She started walking right towards me.

What the hell was happening?

She looked at me.

I looked at her.

Could this be a connection?

As each step brought her closer I began imaging what a relationship would be like with her.

I’d have to fight men off because she’d be hit on so much.

So close I could literally touch her.

She reached her hand out.

And that’s when reality smacked me in the face as she grabbed my friends hand and trotted him out to the dance floor.

She worked her magic on him.

I’d seen this before. It was the pattern.

Next she would move on and find a different partner.

But it didn’t happen.

They danced and I just sat with my jaw on the floor at why he was chosen over me.

Was it my looks?

There’s no way he is better looking than me.

What the hell happened?

While I was lost in my thoughts my friend began making moves on her and secured her number.

What was I witnessing?

The grin on his face after they parted was enough to bridge a gaping hole in a dam.

“When should I text her?” He asked me.

“Well, wait until you leave the damn bar at least.”

He listened to that advice and texted her as I drove the two of us home.

That’s where things got interesting.

If he was expecting to bond with this girl his hopes were supremely dashed.

It was minutes before I stopped laughing.

But my friends ride wasn’t over yet.

After a few minutes she promptly added to the texting thread, Things were back on track for my friend and I was thoroughly impressed, this girl had game.

That’s where I’d like to end my story and start applying the flirting formula.

For those reading, if you already have forgotten what the formula is it’s,

So, where was attraction built?

Technically speaking the girl built the attraction the second she started captivating us with her “water dancing.”

For my friend attraction was built the second she took his hand to dance with him.

So many thoughts must have been going through his head during that moment.

But technically speaking she isn’t ungettable here. In fact, I think an argument can be made she is the opposite of ungettable.

Notice how my friends confidence of winning her over all the guys had grown to a point that he was the only one to secure her phone number.

In fact, he had grown so confident that he wanted to text her right away to further solidify his position.

And that’s when she throws him a roadblock.

Or if we are going to use my terminology.

That’s where she introduces the challenge.

All my friend knows before he texts this girl is the following,

So, my friend, who is supremely confident, texts her with the most generic text you could possibly imagine.

In his mind she is what you would call a one night stand.

The kind of girl that he’d sleep with and lose interest in.

And it’s all shaping up nicely for him.

Until that challenge is introduced in the form of one simple word.

Every preconceived notion my friend had about her comes tumbling down.

He thought he was special.

The one guy she picked out of all the other guys in the bar.

That one word message disproved that.

It just means he was part of the pattern. One of the guys she left behind in the wake of her path.

It’s at this point that most men give up or grow angry.

But that’s when the girl does something incredibly intelligent.

She texts him again, with a compliment.

“Oh right, you’re that cute guy I danced with last.”

But he needs to be careful.

This girl won’t be easy to get.

It was the single greatest display of playfulness and flirting I’ve ever seen.

You see, most women make the mistake of believing ungettable is the same thing as impossible.

The ungettable girl can be “won” just not easily.

The trick lies in how you approach flirting and communication.

Most people are straightforward.

You see, I think the girl always intended to give my friend a compliment.

I think she picked him out because he caught her eye and she did want to pursue things with him.

But she knew she was maybe a little too straightforward in her approach so she had to do something to catch him off guard.

She knew she couldn’t seem too available.

So, she pretended not to know him.

She played with his emotions.

She also knew that if she could show him how she had control over his emotions it would demonstrate a value no other average woman could match.

Think of his emotional state throughout that three text exchange.

He starts off confident when he sends his initial text.

But that quickly changes into being upset when he realizes that she didn’t even remember him.

A few minutes later that emotional state changes again into happiness but not quite as confident.

All because she knew how to use the flirting formula to be playful.

7 thoughts on “How To Flirt With Your Ex”