Today I’m going to teach you exactly what texts you need to send to your ex boyfriend if you want him back.

However, I’m not just going to stop there because I’m also going to explain the benefits of sending these texts and teach you a bit of the strategy behind it.

The best thing about this article is the fact that I am going to be tapping into my experience of coaching others. In other words, I’ve been in the trenches for years trying to understand what works and what doesn’t work.

It always annoys me when I see articles about texting an ex and they give the most basic “text messages” without even explaining anything about the texts.

You won’t get that here.

5 Text Messages To Send To Your Ex

Each text message that I’m going to recommend for you to send is based a rapport building approach.

Now, if you are anything like me you are probably sitting there and thinking,

What the heck is he talking about?

More on that in a second.

For now, let’s take a quick look at the text messages we are going to be covering today.

Each of these text messages needs to be sent a certain way at a certain time if you want to maximize your chance of succeeding with your ex.

Now, what do you think I mean by that?

I want you to take a look at the graphic below, 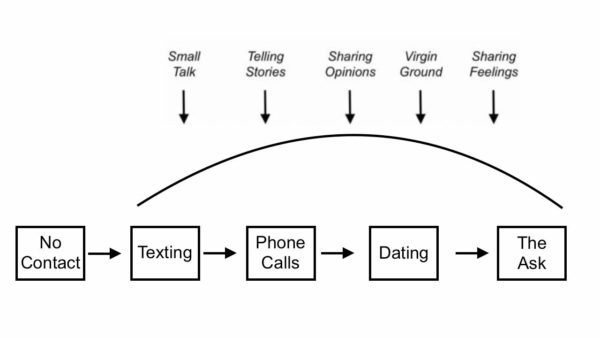 This little graphic is the key to everything when it comes to getting your ex back.

For full explanation of what it is and what it means I suggest you go here.

It may not look like it but this little graphic has taken me over six years and countless coaching sessions with clients to complete.

Essentially it is the blueprint I recommend to most of my clients who want to get their exes back. It tells them what to do from start to finish and you may notice some familiar language around yeh high here, These are the text messages or conversations you have with your ex throughout the whole process.

You see, the ultimately texting your ex is a means to an end.

Never forget that the whole point of all of this isn’t to get a positive response from your ex (though that is good) it’s to get your ex to open up to you emotionally and eventually take you back.

You don’t do that by giving every bit of yourself over to him.

Yesterday, I filmed a video that talked about “layers” and how it’s important for you to allow your ex to slowly peel parts of you back so they want to invest more to figure out what’s at the end. Here is the clip of that particular lecture.

By spreading your text messages out and slowly peeling back the layers you allow your ex to grow interested in you and want to invest more.

Small talk is an entry into a greater conversation.

It is non threatening and therefore easier to illicit a response.

The problem with small talk is that it is typically very boring.

There’s only so many,

“Hey, how bout that weather?”

Lines you can throw without it becoming derivative.

Therefore, the problem here is figuring out how to spice it up enough to interest someone who doesn’t want to talk to you (your ex) and make them want to respond and engage in a conversation with you.

That is why today I’d like to teach you about something I like to call “the hook.”

Are you familiar with the idea of a “pattern interrupt?”

It’s basically something that interrupts the pattern of what is normal.

It also makes the perfect “hook.”

I consider a good hook to be something to hook the viewer in and get them to invest.

In literature a good hook is typically a good premise.

I’m not going to read a book if it sounds boring.

I am going to read a book if the premise sounds interesting to me.

The premise is what hooks me in.

The same principle applies to sending a text message to your ex.

You need to say something interesting enough to get your ex to invest and care about responding.

You can do that with a combination of a good hook and a premise. I’ll give you an example. Now, the only reason this text works is because it combines a hook with a great premise

The hook is quite simply meant to create curiosity. The entire job of the hook is to simply yield a response.

Of course, once that response is yielded the real work begins as you have to find a way to capture your exes attention with a good premise.

In other words, you have to talk to him about something he’d be interested in.

In this example I decided to use something that would work on me.

One of my favorite authors is a guy by the name of Pierce Brown.

I’d be very interested in learning if he was doing a book signing and Q and A session in my area.

I’d definitely go to it. The key to an amazing premise is to make it all about your ex.

If you make your premise in your text about something your interested in it probably won’t work. If you make it about your ex then you will probably get positive results.

Lately I’ve been reading a book on plot summaries called, It’s a fascinating read because the author, by his own admission, says that plot cannot be broken into a singular number.

There are literally thousands of plots.

However, if you look at the history of stories you can pretty much find that there are 20 main plots that most storytellers use to tell a story.

And the one thing these 20 plots have in common is a three act structure.

It’s the payoff in act three that makes a story “worth” reading or watching.

It’s the lesson the protagonist learns that touches us emotionally.

What I’m about to say may sound weird but the biggest issue I see with people when they tell stories over text is that the stories are boring.

This act is all about setting up the story through a “call to action.”

Something has to happen to the protagonist to make them go on their quest.

A prodigy professional rock climber gets an opportunity to climb overseas with his friends and decides to take it.

Again, this is a real story that happened to a professional rock climber.

Is all about spicing the story up and making it interesting.

It’s also about bridging act one to act three.

While climbing overseas with his friends the professional rock climber is taken hostage in an ongoing war in the area.

I recommend you check out this video if you’d like to learn more.

This act is all about closing the story but also teaching the protagonist a valuable lesson.

After being held hostage for six days the captors are all in sorts with what to do with their hostages. The rock climber, seeing an opportunity, decides to push his captors over a cliff, killing them but effectively saving his and his friends’ lives.

So, what was the lesson learned here?

That when the sh*t hits the fan the rock climber was willing to do what it took to save everyone even if it meant doing something horrifying to do it.

But by framing it in this three act narrative it makes it even more interesting.

By telling a story to your ex in this three act narrative you are giving yourself the best chance of hooking your ex in.

This text may seem complicated at first but I assure you that it is very easy to understand.

This one is very similar to text number one in set up but it’s less about small talk and more about substance.

Have you ever heard of the benjamin franklin effect?

Benjamin Franklin Effect: Contrary to popular belief someone is more likely to do a favor for you if they have already done you a favor.

Asking your ex for their opinion is a small form of asking them for a favor.

Imagine if you were to send this text to your ex, It’s not only a perfect “hook” but it’s also a perfect premise.

Men have what I like to call “damsel in distress” weakness.

We like to be hero’s for women who need saving and any woman who wants our opinion on something “needs to be saved.”

But you’d be shocked at how many positive results I’ve seen coaching clients get with this text message.

Perhaps the most brilliant part about this text is that it not only sets up the benjamin franklin effect but it also builds a little bit of trust which is going to be really important for the next text.

One of my favorite movies of all time is a little movie called,

It’s brilliant because it chronicles a mans perspective of a relationship and a breakup in 500 days.

Anyways, there is a scene in the movie where the protagonist, Tom is listening to his (not) girlfriend talk to him and she mutters six simple words that change everything for him.

I’ve never told anyone that before In relationships we guard ourselves for fear of being hurt.

So, you better believe it’s a big deal when we break virgin ground and someone trusts us enough to tell us something that they’ve never told anyone before.

Of course, the question now becomes how.

How do we make someone tell us something they’ve never told anyone before.

The cocktail for success here revolves around two concepts.

Enough time has to go by with enough trust being built in that time.

This is going to kind of go against the grain of this article here but the truth is that this text isn’t really a text you send.

It’s a text you wait for from your ex.

Text #4 is important because if you haven’t gotten it then you can’t advance on to this text.

Sharing your feelings with your ex can be dangerous because often my clients misread a situation and share their feelings with their ex when their ex isn’t ready to reciprocate.

There is no point in sharing feelings with your ex if your feelings aren’t going to be reciprocated.

That is why it is important for you to break virgin ground first.

This is an indication that you aren’t just anybody and your ex is getting close to being ok reciprocating your feelings positively.

But let’s assume you have gotten your ex to break virgin ground with you.

How do you share your feelings with your ex in that case?

Well, I’d like to pull from another Hollywood classic, Hitch.

If you’ll recall one of the most famous scenes in Hitch,

Because if we are being honest with ourselves that extra 10% is everything.

In other words, instead of saying “I miss you so much” I’d recommend you say something like this, Notice how it isn’t exaclty the same thing as you saying,

But it is close.

What we are hoping for here is a response like this, 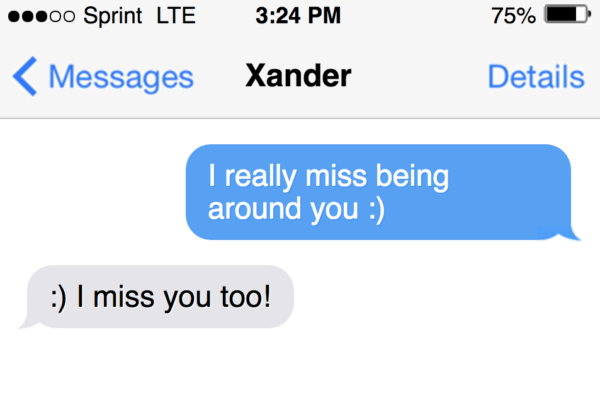 3 thoughts on “Texts To Send Your Ex Boyfriend”