Today we are going to be talking about what it means when your ex doesn’t text you anymore.

More specifically, what it means when they aren’t texting you first.

Is it a big deal?

Well, that’s what we are here to find out.

But perhaps the most important thing you’re going to glean from this article is how you can make your ex get in the consistent routine of texting you with engaged text messages that really help build rapport.

Are you ready to rumble?

Four is a nice symmetrical number, isn’t it?

The four horsemen of the apocalypse…

And today I’m going to be introducing you to the four things that you need to grasp if your ex isn’t texting you anymore.

It’s kind of amazing how many people obsess about their exes not texting them first anymore.

When I first started this website I was the same way.

I put a lot of effort into teaching my clients about how they can get their exes to text them first.

However, as I taught more people and got more data to sift through I started to notice a pretty interesting trend.

It doesn’t really matter if you are the one that starts all of the conversations with your ex.

In other words, having you start every conversation with your ex in your quest to get them back will have no bearing on the final result.

The most important data point to pay attention to is who ends the conversation first.

Starting The Conversation = An Interest In Talking To You

Ending The Conversation = No Interest In Talking To You

So, basically if you are the one ending the conversations you get to dictate when your interest is wavering.

This is actually the reason a lot of people obsess about starting the conversation.

They often think that if their ex doesn’t start a conversation with them through text it means that their ex isn’t interested in talking to them at all.

Here’s where things get a little confusing.

This is the alarming trend I noticed when coaching people, 54 clients that I worked with complained my “texting” techniques weren’t working.

Upon doing extra research and asking them a few questions the one common trend I found was that 48 of the exes in those situations were the ones to consistently end the conversations.

In other words, 88% of the exes in those situations ended the conversations.

After digging down further and singling out the extra 12% who were consistently ending conversations with their exes I noticed that even though things weren’t going like these clients wanted they were still getting better traction in comparison to their peers.

What does this tell us?

Well, it tells us that a lot of people who think that having their ex text them first is the “be all, end all” might actually be wrong. In most cases, when an ex doesn’t text first they are likely to end the conversation first as well.

In other words, don’t obsess about having an ex start a conversation.

Obsess about who ends the conversation.

But why would an ex end the conversation first with you?

Advising clients on texting has always been pretty easy for me.

Most of our clients are predominantly women so all I have to think about is if I would respond to the text message and usually that works.

The one alteration I make though is by doing a thorough analysis of my clients exes likes and dislikes.

I use this clip all the time but what really matters isn’t what you’re like, it’s what you like,

I’m a bit of a weird person.

For example, just the other day I was thinking about the idea of sacrifice and how rare it is.

For the past six and a half years I’ve learned from working with thousands of individuals that human beings tend to be self interest.

We are often motivated completely by things we want.

Sure, sometimes we will throw our partner a bone and do things that they want but the entire time we are doing those things we will often think to ourselves,

I really want to do that thing that I want to do.

Our entire relationship decisions are often based on people who we think will benefit us the most.

Who we think will meet our needs.

And here’s the rub.

We always seem to want more.

That is being human.

I know I got very philosophical on you but consider for a moment the idea of texting.

This simple little tweak to your game plan can be the difference between having an engaged conversation with someone versus a dull one.

Talk to your ex about things they care about.

Not things that you care about.

Now, I’d like to switch gears for a moment here and talk to you about my concept of sending a text.

Let me set the stage.

You and your ex have gone through a breakup.

Let’s just assume a worst case scenario and say that they don’t want to hear from you.

What can you do to get their attention.

I’m a fan of westerns.

You know, the style of movie set in the wild west.

Probably the last great one I saw was Django Unchained,

Now, pretty much the entire premise of Django Unchained can be summed up with one singular quote,

Well, you won’t sell your best. You won’t even sell your second best, but your third best? You don’t wanna sell either, but if I made you an offer so ridiculous, you’d be forced to consider it?

It’s about two men trying to swindle a very rich plantation owner by offering a ridiculous offer that the owner will be forced to consider it.

Think about this idea of a ridiculous offer for a moment.

This concept is based solely on curiosity.

You do or say something so ridiculous that it creates enough curiosity to have these rich plantation owners accept you into their houses with open arms.

Essentially it’s the hook to get you in the door.

We need to craft a “ridiculous offer” for you to text your ex so that it gets you in the door.

I refer to this as “the hook.”

If you’ve ever wondered how the send a great first text message to your ex this would be the crash course to pay attention to.

Let’s take a moment to go over these two concepts.

Pattern interrupts work great here but ultimately “curiosity” is embroiled in mystery and the very definition of mystery is not being able to see the full picture. Notice how this exudes both curiosity and mystery.

“What’s this secret they have? I have to find out.”

The main goal here is to simply get a positive response. Once you’ve engaged your ex you know for a fact that you’ve established enough curiosity.

This is where you want to start talking about things your ex is interested in.

Well, otherwise you’re going to lose them in the conversation.

Let’s say that you work at a bookstore and your ex is an avid reader of science fiction novels.

His favorite author just agreed to come to your bookstore for a signing but it hasn’t been pushed live to the public yet. This engages your ex in a conversation that they are interested in.

In other words, it’s all about them.

Remember this concept because it’s going to be important for you if you do decide you want to get your ex back.

Tip #4: Ending The Conversation At The Right Point

If you are curious as to how you can flip the script and make your ex talk to you first then this is the tip you want to pay attention to.

First things first, I want to get any delusions of magic bullets out of your head.

Causing an ex to text you first isn’t going to happen overnight.

In fact, to successfully do it you’re going to have to use everything I’m teaching on this page and it may take months.

Getting your ex to text you first is a little like that.

You’ll have to fight and grind your way with strategy and tactics to get the settings just right.

But the tactic I’m about to show you without a doubt is the most important one for you to grasp.

That tactic is about having you end the conversation at the high point.

You see, every conversation you have with someone has a certain flow to it.

Each flow is different depending on the conversation and person you are having it with.

However, the average trajectory will look something like this, Notice how there is an incline in satisfaction as the conversation begins but as time goes on things begin to fall.

Most of the clients I’ve worked with let the conversation fester and ultimately pull the plug on it right here, This is a problem because your ex has nothing to look forward to when the conversation ends. 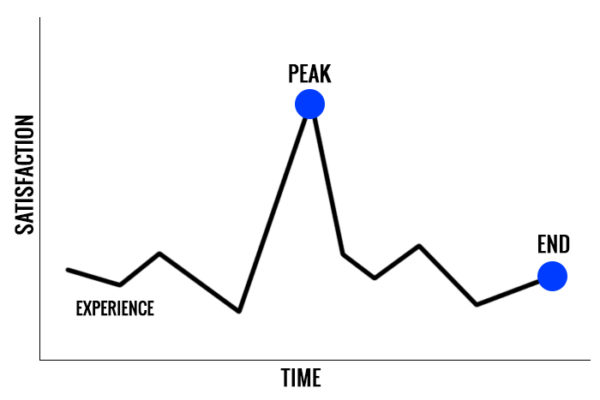 By letting the conversation satisfaction decline and fester you are reinforcing that to your ex.

Instead, it’s a lot more powerful to end the conversation close to the peak of it. This is powerful because not only are you ending the conversation at the peak but if you consult the peak-end rule, your peak is your end.

Essentially you get more bang for your buck.

You’ll leave your ex with this constant longing for more and the more you establish this pattern the more likely your ex is to reach out to you and start a conversation first.

2 thoughts on “My Ex Doesn’t Text Me First Anymore”