Without a doubt learning how to make your ex boyfriend miss you is the most popular topic on this website.

In fact, it’s been so popular I’ve covered it many times before in articles. Yet, as time moves on I learn more about what works and I am forced to write an updated version so that I give you the best chance to make your ex miss you.

Today I’m not only going to teach you how to make your ex boyfriend miss you but I’m also going six things that I’ve never talked about before.

5 Ways To Make Your Ex Boyfriend Miss You

As I stated above, this isn’t exactly virgin ground I’m covering here.

I’ve talked about this topic a lot which means I’ve covered a lot of the basics already. Today I wanted to do something new.

I wanted to merge the old with the new to give you an updated version on what I’m seeing working with my clients.

To date, there are five big things I want you to learn about that will really make an ex miss you.

You may glance at this least and think it looks relatively simple.

In fact, as you read on you’ll learn that many of these “ways” have double meanings.

Don’t assume you know everything.

Oh, and in case I hadn’t said this already, this is one article you aren’t going to want to skip.

Way #1: Understand When You Need To End Interactions

I mostly work with coaching clients who want to get their exes back.

There are a few exceptions but for the most part that sums up my client base. One thing you learn quick as you coach is how badly these people want their exes back. I’m not saying that is a negative. In fact, I think it’s great to be motivated.

However, sometimes my clients have a tendency to take things too far and step over boundaries they have no business stepping over.

One issue I’ve been seeing a lot of lately is not knowing when to end interactions with their exes.

Throughout the last few months I’ve talked a lot about the flow of conversations and how it typically looks something like this, 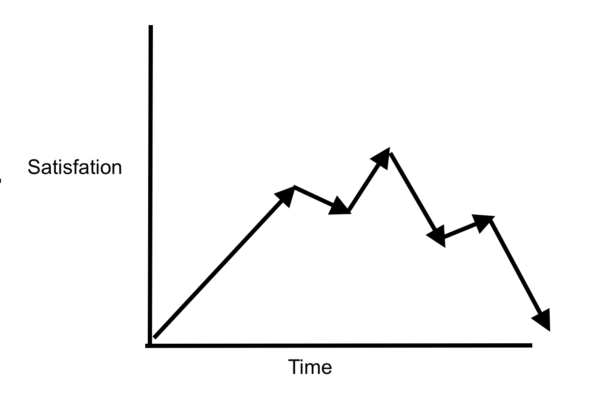 Now, the thing to keep in mind here is that every single conversation has a different “flow” to it.

Some conversations will follow the graph above while others won’t ever be able to get off the ground.

One thing remains constant though, typically as time goes by the satisfaction of that conversation weans.

The problem I see with my clients is that they suck the conversation dry.

They want so badly to talk to their exes that they are willing to let a conversation or interaction go stale just to get that extra time.

In other words, they end the conversation here, Now, what is the negative with that?

Isn’t that what we want?

A long, satisfying conversation with an ex.

Well, yes that is what we want but when you start to look at things from a “missing” perspective it helps to understand how human beings process memories.

We actually don’t think back and remember the entire experience.

We remember an experience based on two distinct points, This is something scientists have labeled as the “peak-end” theory.

So, let’s go back to our example above and say that you ended the conversation with your ex here,

Right at the very end, where the conversation satisfaction has reached its lowest point.

In other words, you are shooting yourself in the foot and giving your ex a 50% chance that instead of remembering the best parts of your conversation he will only remember the end of the conversation where things got boring.

Well, why don’t you end your conversation at the peak? This way your “peak” and your “end” are one in the same?

This leaves your ex not only missing you but wanting more.

Way #2: Achieve The Outside Looking In Aura

I have two stories I want to tell here.

Last week my wife and I took my daughter to the park and there were a group of kids there playing on this “built in airplane.”

Now, we’ve been to this park for three years and she has never shown any type of interest in this airplane jungle gym.

And yet that day she had to witness a group of kids playing on it.

As you can imagine, the value of that airplane to her suddenly rose and soon my wife and I were hit with the,

Being on the outside looking in can be a powerful motivator.

That was the first story.

The second story should hit a bit closer to home for you I hope.

When I was 19 years old I met a girl I had a pretty decent crush on.

The problem was that me and my best friend met her at the same time.

Now, the thing you have to know about my best friend was that he was a stud with girls and I… well, let’s just say that I wasn’t.

Anyways, an opportunity to invite my crush out to a football game arose and I jumped on the opportunity.

But then the little get together evolved into something that she wanted to invite her friends to.

And pretty soon instead of being a nice intimate date we were a group of seven.

Of course, since everyone in the group knew my best friend they naturally asked if he was coming.

I lied and said,

I asked him but he said he wasn’t feeling well.

It was a lie because I never asked him.

The truth was that I was worried my crush would develop a crush on him because he was a charming bastard.

I figured it’d be a good idea to just exclude him from this little shindig.

This was a problem because when he later found out that he went out without him he went ballistic.

He was left on the outside looking in.

The more you can do things that your ex feels left out of the better it is for getting them to react the way you want them to react.

One piece of advice, never be direct about “leaving them out.”

In other words, use social media and tell a story through pictures.

When I was doing research for how to make an ex boyfriend miss you the one consistent piece of advice I stumbled across was,

But what does that even mean?

I hear experts recommend that all the time and I’m not even quite sure I know how to explain to someone to be “mysterious.”

Here’s the closest I’ve ever come.

Think of every interaction you have with your ex as laying the groundwork for a great riddle.

I mean that we like to watch videos, tv shows and movies.

But reading can actually teach a lot about how to be mysterious.

Because human beings have grown lazy.

But every once in a while an author will come along that captivates the imagination and can get millions of people to continually read.

What makes people put in that type of work?

In 1997 a Japanese manga novel was released called One Piece, In fact, it has grown so prolific that in pure sales figures it has old sold Superman comic books.

I have been reading this series religiously and when someone recently asked me why there was only one answer I could think of.

Because I want to find out what happens next

The author has slowly but surely introduced and cultivated riddles for over 20 years.

He has done such a good job that when you finally do solve that one riddle you couldn’t wait to solve two more are introduced and it keeps you hooked.

It’s kind of like an onion. When you peel back one layer there’s another layer waiting to be peeled.

You need to aim to introduce these little riddles about yourself in your interactions with your ex.

The biggest mistake I see people making when they go on dates is giving too much of themselves over.

Instead just peel back a small layer that intrigues and creates questions and with every interaction as your ex slowly peels back the layer you give a little bit more of yourself.

Pretty soon your ex will be hooked and missing you when he is away from you.

Most of my clients has this misperception of me.

They think that I know everything there is to know about getting an ex back and that my word is the word of god.

The reason I seem so knowledgeable about exes is that I’ve acquired my knowledge over time and as a result I’ve been able to see what works and what doesn’t work.

One thing I know now that I didn’t know back in the day was how to use dates.

When I first started Ex Boyfriend Recovery I was afraid to recommend to people that they should go out on dates. Instead, I’d say something weak like,

If you feel ok about it, you can go on a date…

I now know how stupid of a statement this was.

You absolutely need to go on dates with someone else.

Even if the thought sickens you or makes you cry you still need to do it.

I am non negotiable about this now.

Because I have seen it be so effective and it also creates a bit of the “fear of loss” emotion that we know is essential for making your ex miss you.

Going on dates closely relates to what I was talking about by creating an “outside looking in” situation.

If your ex witnesses you going on a date with someone else they will start to view you in a new light and it creates an increased sense of urgency.

Way #5: Accidentally Leave Something Behind

My wife and I beat the odds.

We were in one of the most difficult relationships, a long distance one.

Saying it was difficult would be an understatement.

We’d then proceed to set the world on fire for a few days and then go back into an eternal purgatory of missing each other.

One thing I’ll never forget that she did was “accidentally” leave some of her perfume behind.

She visited me one time and spent a good four days with me before having to fly back home.

While packing up she conveniently forgot to leave a bottle of her perfume behind.

I say “conveniently” because she later admitted to me that it was by design.

She was hoping that I’d take the perfume, smell it and be reminded of her.

If you can accidentally leave something of yours behind without it being obvious it will accomplish two things.

It’ll remind your ex of you and it’ll guarantee another date.

2 thoughts on “How To Make Your Ex Boyfriend Miss You”