Ever felt like your ex was “winning” the breakup, and you were just stuck somewhere?

Today we’re talking about what to do if your ex is doing better than you after a breakup.

And if you stick around and read this entire article I’m going to show you the following things,

What Do I Mean When I Say Your Ex Is Doing Better Than You?

So, what does it exactly we mean when we say our exes are doing better than us after a breakup?

Simply put, it means they look like they’re doing awesome without you and aren’t bothered by the breakup at all.

This includes things like going out and having fun with friends, going on a lot of other dates, or even replacing you with someone else.

Those emotions might even be enhanced when you look at your ex and think,

Today we’re going to look at the four most important things you should do if you find yourself in this exact situation:

Thing #1: Take Stock Of How Long It’s Been Since The Breakup

As human beings, when we go through breakups, we tend to overreact a little bit.

Our emotions are running high, and as a result, our logic is running low, so you may just be overreacting.

You might even be making the big mistake of forgetting that people deal with the stages of grief after a breakup at different rates. 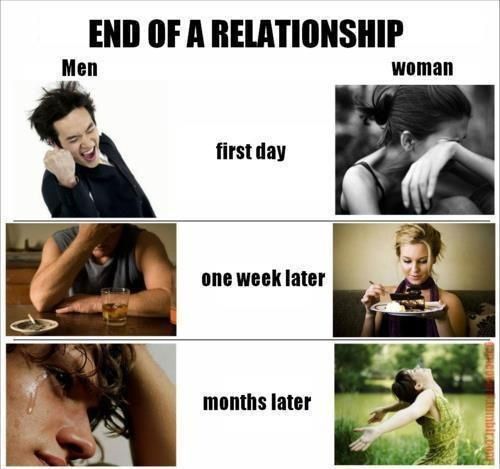 For example, after a breakup, men will go out and party, but they’ll eventually start missing their ex and start regretting the breakup.

Women, on the other hand, start with being really upset about the breakup but slowly but surely, they rebuild themselves and move on with their life. The question is, are these stereotypes true?

Well, after studying lots of first-hand data, we’ve found this to be mostly true.

If you see your ex doing much better than you immediately after a breakup, you need to realize that it’s still not long enough for them to start regretting their decision to break up with you or start missing you.

Now you may ask at what point does an ex go from doing “better” without you to starting to miss you?

The answer is: It depends.

I know it’d be super convenient if I could give you an exact timeline, but that’s just not how it works.

People and relationships are different, so for some, this might take a month or a year, whereas sometimes it never happens… it truly depends on your ex and your relationship.

Generally speaking, though, it will take about 3 to 4 months before your ex can start missing you.

But remember – not all exes will miss you on their own.

That’s why it’s important to do thing number two.

I’ve been talking about this rule since the beginning of time because it’s just THAT essential and successful.

The no contact rule is as strong as it has ever been in 2020, and just as many people are successfully using it.

But I think people still have a bit of trouble understanding how the no contact rule is supposed to be used.

Most people use the no contact rule to make their ex miss them by ignoring their ex for 21-45 days.

They assume that their ex is going to miss them if they cut off all contact for this time, and that means the no contact rule succeeded.

Usually, exes do end up missing you, but here’s the problem with this line of thinking – your idea of “success” of the no contact rule is based on them reaching out to you. 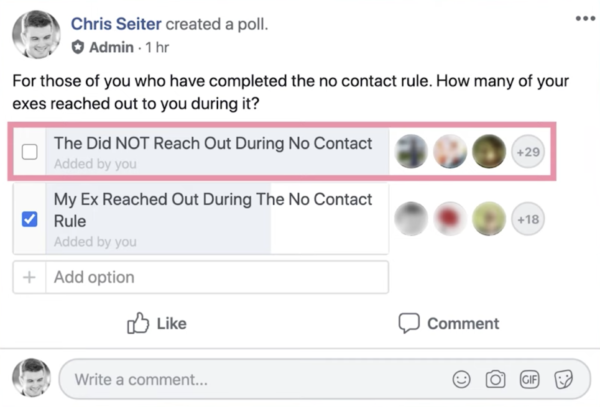 Yet the paradox of the data is that 95% of our success stories say that they utilized a no contact rule.

So, what does that tell us?

Well, that tells us that you can’t just base your decision on whether the no contact rule is working based on if your ex reaches out to you.

You shouldn’t even be focusing on your ex at all during the no contact rule. Instead, merely ignoring your ex will get you all the psychological benefits, but what you really need to be doing with that time is focusing on yourself, and that’s where the third point comes into play…

Thing #3: Work On The Holy Trinity

The holy trinity is basically the three most important areas of your life – health, wealth, and relationships. These three are undeniably linked together, so if one goes down, it affects the others too, and vice versa.

Let’s use your breakup as an example.

Your breakup falls under the relationships category of the holy trinity.

So, before your breakup, the relationship area of your holy trinity was doing pretty good, but then the breakup threw that aspect off.

Those negative effects will then trickle their way down to your health and wealth areas. All of a sudden, you start feeling the physical ailments of the breakup like being unable to go for your regular morning runs because you’re just too depressed to get out of bed. Your health is impacted.

This then spills over onto your wealth when you go to work. You don’t care about work because you’re too burdened with your emotions. Your boss ends up yelling at you for not being productive.

All of this happened because the relationship area of your holy trinity was off.

The question now is – how do you get the three parts of your holy trinity in balance again?

Ideally, it’s a never-ending pursuit of balance, and the best part is that the interlinked nature that took all parts of your trinity down can also work to push them back up!

I recommend focusing on the areas of your life that you know you can improve. For example, maybe you always felt like you could’ve had a better career, and now’s the time to try something new.

Now I’m not advocating to quit your job without backup, but if you have something positive lined up and you were afraid to leap, you can try it now.

If you upgrade your life in all three areas, you’ll find that your ex will naturally become attracted to you, especially during the no contact rule.

But what happens if you reach out to your ex and they ignore you?

They want nothing to do with you, but you really want their attention…

This point is inspired by this guy I’m currently working with in our private Facebook group who’s trying to get his girlfriend back.

This guy has everything going for him – his life is put together, and he’s REALLY good at following all our advice at every step of the way, but his ex-girlfriend still wouldn’t respond to him.

During a thorough brainstorming session about how to get his ex’s attention, my client shared that he was reading a bunch of books about hostage negotiation.

The main takeaway in them was to create shared connections, so the hostage-taker experiences euphoria.

Hostage negotiators are taught to empathize with hostage takers and see the world through their eyes, so they come across as relatable as possible.

That sets the stage for open communication.

How does this relate to breakups?

Well, my theory is that human beings have this innate ability to find shared connections.

Having shared connections with someone is often what takes our relationships to another level.

For example, have you ever come across someone who loves the same book series or TV show as you? I’m betting you have, and that’s why you can relate to the euphoric feeling of wanting to talk to them more and more!

Coming back to my client, he noticed that whenever he posted something about a shared interest with his ex, she would mirror his behavior and post something about that too. While we haven’t cracked her yet to the point of talking to him, I think this is encouraging behavior because it means she’s paying attention.

And that’s our primary goal. To have your ex pay attention to you and have a great conversation as a result.

You can also utilize this technique to make sure that your ex is still taking note of you after the breakup.

By posting something that you both care about, you create (or remind them of) a shared connection that makes them pay attention to you.

Seeing your ex doing better than you can hurt a lot but here are four things to keep in mind in that situation: